In the absence of the promised competing match report from the Social Secretary, special correspondent Simon Hawkins reports:

Barford faced Snitterfield last Sunday (24th August) missing our talismanic skipper Griffin, who was off having a baby or something (thanks for coming Ben). With just ten men (including three “mystery guests”) to face the combined might of Snitterfield and long-time Barford foe Tim Fell, the Hares batted first and it did not start well. Jake (“mystery guest” 1), Sandy, Paul H, International, Shawn and Mark Williams (“mystery guest” 2) all fell cheaply to a series of excellent catches, leaving us at 27-6 after 12 overs.

It was down to Will and Captain Morgan to steer us past our lowest ever score of 30-something which they did before pressing on. In the past Simon has played some good attacking knocks but this time he matched some cracking boundaries with a solid defence. By drinks we’d reached 72, with plenty more work to do to make a game of it, but Simon and Will carried on solidly, bringing up a hundred partnership after 28 overs. By now they were scoring freely as Will reached another 50. It looked inevitable that Simon would join him until he went for a big shot and was caught on the boundary for 38. He trudged off looking disconsolate but wait! Spectators confirmed that the fielder had overstepped the boundary and the big little fella was called back with a 6 to his name. He soon raced to a brilliant maiden 50 but was out straight after.

By this time Will had been bowled for 63 and together they had added 131 which is a club record 7th wicket partnership, beating the previous record set in 1999 by John “Smithy” Smith and Stuart Thompson. It was also the 13th highest partnership for any wicket. A brilliant effort.

Your correspondent and Mike Ireland (“mystery guest” 3) couldn’t continue the good work and we were all out for 165, which was far beyond what any of us could have imagined earlier in the day.

Snitterfield started their reply solidly with Richard Yendall and Andy Robertson both looking comfortable, but struggling to score off the miserly opening bowling of Mike Ireland, who only conceded 14 runs in his 8 overs and was put the home side under “scoreboard pressure”. Mark Williams got the breakthrough by bowling Robertson with a ball described by keeper Pierson as “an absolute Jaffa”.

They were still making steady progress, however, and looked strong favourites as they reached 90 with only one wicket down. Great leaders only show their true colours in a crisis, and Skipper Drage made the inspired decision to switch Paul H from the bottom end to the top, thus transforming him from lumbering donkey to glittering show pony. Paul immediately snaffled the crucial wicket of Richard Yendall and then went on to take 3 wickets in an over, ending with figures 8-1-26-5. There was the hint of a fight back from Snitterfield’s Krishna who was 37 not out, but his batting partners became increasingly geriatric as wickets fell, and they ended on 142-9 at the end of their 40 overs. It was a brilliant win based on great performances from Man of the match Simon, Will and Paul.

Before we get too cock-a-hoop I should make a note of thanks to Richard Yendall, who made a game of it by not bowling himself until the very end – had he brought himself on when we were 27-6 I think we might have all been home by 4 o’clock.

Quote of the day comes from Tim Fell – “does that Timms still play for you – the one who looks like Neil Kinnock?” 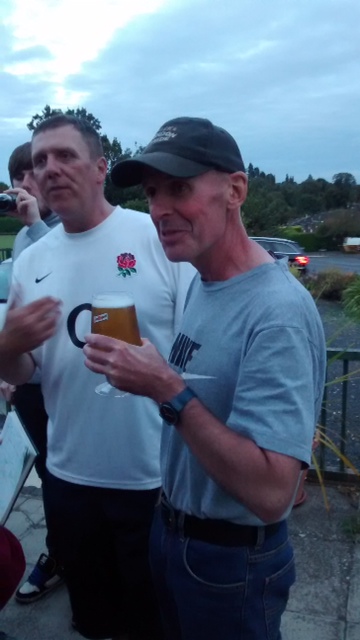