It’s not often we get the chance to “blow our own trumpet” as it were, especially given the usual levels of performance on the cricket field, but this weekend’s “Sunday Times top 100 places to live in the UK” has afforded just such an opportunity.

Barford has crashed through into the top 100 for the first time, ranked at 57th in the country, and is the top village to live in the Midlands. And the first (and hence, of course, most significant) reason in the accompanying blurb is the “sociable cricket club”, where apparently you don’t need to be Alastair Cook to join – personally, I think we’re more after the Alastair Sim type. I’m also not too sure about the reference to the “thwack of leather on willow” – normally I find it’s the thwack of leather on flesh with an accompanying cry of “ouch” (or something similar) that is more redolent of a Barford summer…

Shamefully, the local rag has seen fit to ignore the huge impact of the cricket club and focussed instead on minor issues such as crime rates, house prices and school performance.

Imagine if we actually played in the village! 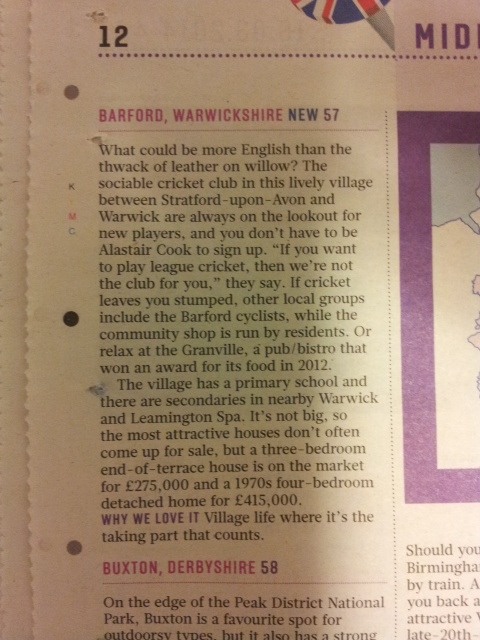