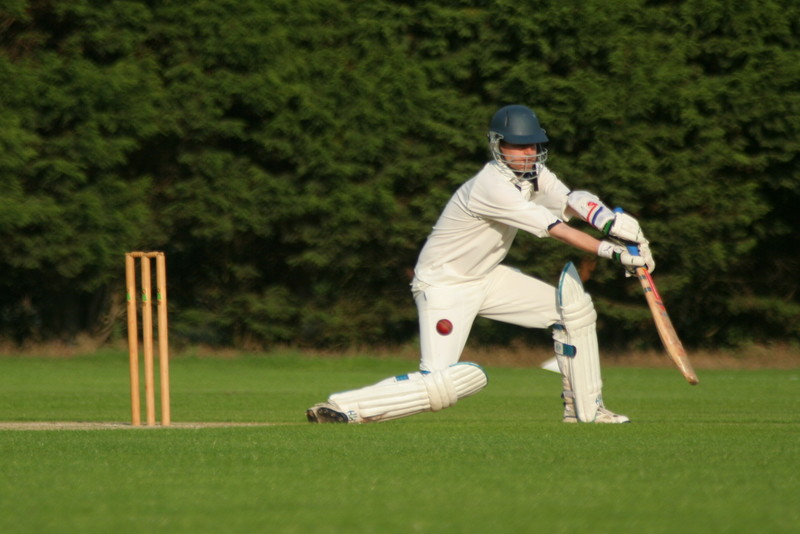 So we met up in the Star for a pre-match drink. I wouldn’t have referred to this but it turned out to have more impact on the afternoon’s events than might otherwise have been expected. Tour latecomer, Richard Johnson, was looking for a game and Mike “Hairy Northern pit pony” Watts, AKA “Geordie” was looking for a couple of men to shore up his All-Star IX and make it XI.

Rich was duly put forward and snaffled up by the Newcastle exile. He then set out on a begging mission for one more three legged dog/hamster/goldfish, anyone, to get the XI factor. At this point one who shall remain nameless (alright, it was yours truly) helpfully piped up “Geordie, Ben’s looking for a ga……” and before he could stop himself, the said numpty had volunteered the best all-rounder on the tour to bat for the other side (so to speak, and bowl, as it turns out)!

And so we removed to the Sulis Cricket ground, pulling up to see one game underway involving a bloke in a storm trooper outfit and another pitch occupied by a team with a rather strenuous looking warm up routine. This can’t be right, thought us, but a quick recce turned up the pitch, approximately 1/3 mile from the changing rooms, almost in the next parish, but what a lovely pitch it was!

We gathered ourselves and waited for the 2:30 start. Skipper Morris negotiated with Geordie that he could either bat Ben or bowl him, not both. Said Northerner played dumb and didn’t appear to grasp this concept, saying “Howay man, petal man a canny bag o’ tewda….arl burl him a bit and bat him at number eeyat”, or something like that.

So we proceeded to toss and Barford lost it. I agreed with Geordie’s decision to bat first (as in, if we’d won the toss I’d have elected to bat first as well) but nevertheless proceeded to set the field. “Spread out lads”, “Give yourselves ten or so”. “in on the one” etc. etc.

So off we went. Tim “finger snapper” Jolly opened the proceedings and cleaned up one of their openers pretty quickly. Then he did it again with their No3. No 2 went on to 13 before Mike “only on tour” Ireland tweaked him, LBW with a very polite “How is that?”, ably supported by none of his team mates. Up went the finger and off went No2. No 5 came out and made 5 before Keeper Morris snaffled a stumping off another of Ireland’s off breaks.

Meanwhile, at the other end, Richard “Statto” Johnson was steadlily betraying his club mates with a neat 12. Even citing an innocent spectator behind the bowlers arm as off putting and holding up the game. Terrible sportsmanship what? Club Captain O’Reilly soon put paid to such insubordination and gamesmanship though and took a good catch off one of Paul “Web Master” Johnstone’s seamers.

On came a big hitter at No 6, systematically knocking his way to 51. A post drinks bowling change though saw Simon “Andy is not my father” Hawkins brought back on by Morris and we were rewarded with a great catch at point from PJ. Over optimistically Morris said to the gathered huddle, “I think we’ve got a great chance now lads”. Famous last words, eh? On came Ben “that’s not how you spell Judas” Griffin proceeding to try and sledge the keeper with numerous witticisms. For once, Morris elected to keep his mouth shut in response (or he may have been stunned in to a dumb silence) and got on with the job of chopping and changing the field, his cap, helmet, bowling attack, you name it he tried it! At the other end wickets kept tumbling but Griffin knocked on…and on…and on….to 33 N.O.

Eventually Geordie made his entrance to a Barford Guard of Honour. He nurdled 4 runs before the genius change of bringing on Chris “I can only bowl googlies” O’Reilly. Three balls later Umpire Romyn was feeling a bit peckish and decided it was time for tea so Geordie was a gonner ,LBW, and the Star were all-out for 150.A gettable total we thought. The bowling attack shared the spoils with Andy “virgin mary” Hawkins acheiving 4-0-24-1 wkt, Gary “Call me Sonic” Dunn 5-0-23-0, Simon Hawkins 8-0-43-1, Mike Ireland 6-0-37-2, Paul Johstone very economically 4-0-7-1, Chris O’Reilly 0.3-0-2-1 and, most impressively, Tim Jolly 8-4-10-4. Well bowled Timbo!

So out went the openers, Sandy “the Chairman” Pierson and Steve “Erdsy” Herring. Sandy forgot to concentrate and was caught off his third ball for zip – unlucky Sandy! Chris O’Reilly then came to the wicket and swiftly added 27 to the total, surviving at least one dropped catch at the butter fingers of Ben “quite un-safe hands” Griffin. Meanwhile Erdsy proceeded to take the shine off the ball for a good few overs. He was clean bowled by Rowan, for (a well knocked) 1. PJ came on and proceeded not to hang about, departing having been caught off the sublime bowling of Ben “integrity counts for nothing” Griffin. To be fair though, Ben did go on to try and rescue his Barford reputation with another couple of dollies dropped.

So out came Pete “not very much on tour” Fisher. And, very shortly afterwards, back in came Pete Fisher, having been caught sensationally, one handed, between square leg and midwicket, by none other than Richard “one time in a hundred” Johnson, off the bowling of some bloke called Griffin. “Caught Johnson bowled Griffin for nought are they taking the p*ss?” was Pete’s utterance.

Meanwhile, Morris’ plan to shore up the middle order came in to play with Simon “who needs a mongoose?” Hawkins. He diligently set about the bowling and nurdled, cajoled and occasionally smacked his way to 42. Following Fisher’s treacherous dismissal, Simon’s brother Andy, then came to the crease; Morris having elected to drop himself down the order a bit.

What came next was a beguiling demonstration of incorrect shot choice combined with an excellent eye. Always play across the line is A. Hawkins’s motto. Geordie tried to set the field but he had no idea where the ball would end up next, just like Andy, in fact. Griffin, trying his hardest to impress his new team mates, threw everything in to each delivery. How he avoided a stress fracture of the shin is incredible. The ball nipped, swerved, dipped, spun…..oh hang on, the ball went straight as a die at mediocre pace and Hawkins (A) mis-timed one to be caught (possibly by another rebel, Geordie, although the scorecard isn’t so clear on this) for 33. He was swiftly followed by Gary Dunn who swashbuckled at a couple before succumbing for nowt to the narcolepsy inspiring bowling of Griffin. It was getting close at this point and in order to try and win the game Morris dropped himself to 10 so in came big Tim Jolly to partner S. Hawkins. They smashed it around a bit before, Griffin (who else) trapped him LBW. Romyn’s finger went up again and off went Simon. “yes there were no arguments about that one it was pretty plumb” or words to that effect, he said, in typically understated fashion.

So in came Morris, faced four balls and was clean bowled, for zilch, by that bloke Griffin. This was starting to get tedious. So it was left to Tim and our resident No 11 Mike Ireland to save the game. At that point the treacherous Geordie brought on Richard “anything Griffin can do I can do just as well” Johnson and Jolly was caught for 7. We were all out for 138 and the Starford won by 12 runs.

In all it was a very exciting match, which rolled one way then the other. I honestly thought we were going to win with the Hawkins Brothers at the wicket. However, like that other unrelated showbiz duo, the Righteous Brothers, they only had a limited supply of hits before their time was up. Sadly the twitch in the tail wasn’t enough to carry us through to the victory. Who knows though, without the two ringers who we helpfully supplied, I suggest the result would have been very different.

After the game we adjourned to the Pulteney for beers, dinner and fines and a ritual humiliating of Griffin and Johnson. Neither of them seemed particularly concerned though, to their credit. My thanks to the team for trying their best and let’s see what happens next year. Maybe Geordie will have become a Mackham by then, and forgotten how to win?????