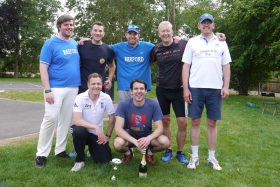 The club side emerged triumphant from a closely fought sixes final against last year’s winner, Snitterfield.

The event was held at King George’s Field in Barford and was run in parallel with a netball tournament organised by Barford Netball.

Huge thanks to everyone who took part and all those who helped make the day run smoothly. Same time next year?