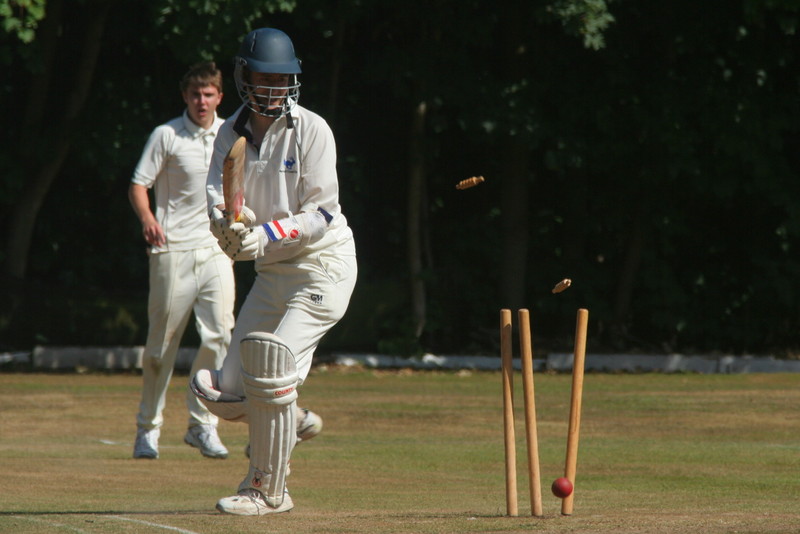 A fixture that produced a dramatic draw last year again promised much in the return match. In almost identical hot and sunny conditions, a slightly re-jigged team arrived at the picturesque ground after a healthy lunch in Bournemouth’s finest proper pub, the Goat and Tricycle. Another time game was agreed and the toss was, well, negotiated by your captain and unusually having lost it I was asked what I wanted to do. As the opposition were going to lose players after tea, we agreed to bat first and both Chris’s were sent into the breach. Unfortunately C Prince fell early, but O’Reilly was joined by P Johnstone who continued his good form of the season and the pair made it to 51 before O’Reilly fell victim to the brothers that were to cause us problems later on. Pete Romyn’s luck was out as he failed to score and despite getting off the mark with a 4, Henderson managed to find a find a fielder who plucked a shot out of the air. Shortly afterwards Paul J was run out for the top score of 45 and we were left teetering on 79 for 5. On a ground where the boundaries hadn’t appreciably grown since last year and a score of over 240 had only just secured a draw, things were not looking good. However cometh the hour, cometh the man and in a crucial partnership with free-hitting Ben Griffin, Donny’s finest, Steve Herring came to the crease. Unencumbered by a night of clubbing, he rolled back the years getting the innings back on track with 10 solid runs. The tail wagged with entertaining runs at the end and a target of 150 had been set.

Without the facilities of the hotel, tea was an exciting affair, slightly short on milk and plates, but more and more kept coming, and by the end, we were in danger of having to take a tea break within the tea break to make the most of the lemon drizzle cake.

The tight opening overs from Griffin and Jolly produced a flashing chance to Pete Romyn but not much else in the way of runs or wickets until the talented brothers got their range and started to ‘go large’ and were well on the way to a 50 partnership opening burst. Finally Ben stomached a catch off Tim’s bowling to dismiss the opener. Now it was time for spin, and Mike Ireland start twirling from the pavilion end but runs were still coming from the other end. ..until Paul J’s second over. Two wickets in two balls changed the situation and 62/3 was a much healthier scoreline. With only 8 wickets to get in total, we had an end to bowl at even if we couldn’t get their big-hitting opener out.

Game on and some optimistic field placings paid off after the break, with big turn and bounce from tourmeister Mike forcing a catch to pop up to short leg. Things started happening quickly and Hawkins weighed in with a wicket in his first over – another catch by Ben. Wickets were tumbling now, Mike bowled another jaffer and Tim J made good on an earlier (much easier) missed chance to remove their opener by taking a great catch off Simon. Hinton had slid to 86/7 and with the final pair at the wicket (including veteran Alan who arrived with a runner), surely there wouldn’t be another twist? Intent on defence and with time starting to run out, the last pair were providing stubborn resistance. 5 maidens in 8 overs from Johnson and Henderson couldn’t extract either of them and so the ball was tossed to Griffin who showed us how to do it by flicking the top of off stump with his first ball and a rare tour victory was secured.

Having stared down both barrels of defeat for quite a while, it was nice to enjoy another close game and once again thanks to Hinton Admiral for a great ground and fixture.