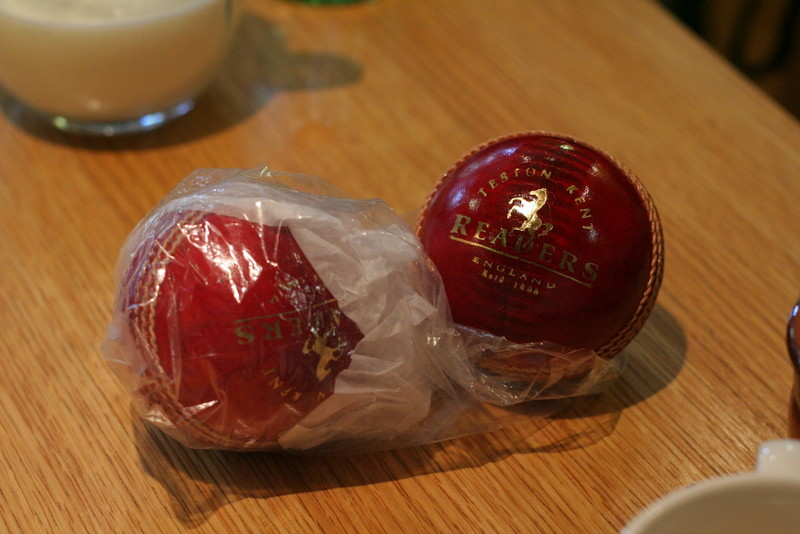 We negotiated a difficult toss with a win and it all went up hill from there. Or it might have been an uphill struggle. I can’t remember to be honest, it’s all a bit hazy. So what follows may be an accurate report or it could be partial fabrication. Either way, it probably paints the skipper in a better light than he should be.

So once I’d won the toss and elected to bat the fun began. Messrs Chris (Prince and O’Reilly) opened the batting. Mr Prince soon closed it. Pete Romyn stepped in at number 3. Vertigo set in being so high up the order as his run came and his wicket went. Mr Peirson then went out. I believe he’d had a few, so was nice and loose. The sticky wicket was clearly a challenge though and tumbleybump over he went “sorry field” was his cry as he hit the deck. After nurdling it around for a good 20 minutes he gracefully sacrificed his wicket for the princely total of (fill in your own answer here but it wasn’t double figures). The Griffin then made his tour debut. Wheeling his bat like a dervish he swiftly waved, wafted and stroked his way to a respectable twentyish. Skipper Morris sharpened his axe and with a piece of willow hewn from the gold of the Gods stepped up to the mark. One cuff to leg, a chinese cut to fine leg and two more scoring strokes brought up six and spelled “t h e e n d” as one didn’t nip back and proceded to remove his middle stump. Richard Johnson and Timmsy.Timmsy added a few more before the 20 overs caught up with us with just 105 on the board.

Morris felt that wasn’t really enough to defend but set about them, opening the bowling with Griffin from the Main Road End and Ireland from the Hospital End. The plan to use the setting sun to blind the batsmen with Irelands looping spin was thwarted by a cloudy evening sky. They did their bit though and Griffin had their No2 caught for 11 and Mike their No 3 for 6 – 35 for two and looking tight. The first bowling change brought on Hawkins and Jones, with Squadron leader Morris keeping his prize Spitfire in reserve. Jones removed their other opener (3-47) and a game still looked on(ish) Lo and behold Morris had a word and Wing Commander Peirson was tempted out of bowling retirement. Seven comedy deliveries later (including another tumble, which earned the Champagne Moment of the tour) he was tempted back in to it. He had done his bit though and pegged the score well (1-0-0-12). Timms then delivered two supreme overs of excellence (2-0-1-9) including one ball that might have turned, then again it might not. Either way the batsman lost concentration as the ball made its nebulous way down the wicket, played and missed and O’Reilly removed the bails. Bindon then unleashed their departing star player. In his last game before emigrating to the USA he wandered on to the field and smacked it around a bit. Various field changes were considered but the game was up. Needing four to win off 30 balls we all spread out to save the singles. Unfortunately we spent the four and that was that. 106 for 4 and Bindon were again the victors.

The main blame for this might be laid sqarely at the door of the tour supporters who were more tempted by the Kings Arms than Wareham Cricket Ground (you know who you are!) However, for some reason our august Chairman appeared to want to carry it on his not inconsiderable shoulders. Sandy, the offer is gratefully acknowledged but there were eleven of us out there and we’ll all take our fair share of the responsibility!