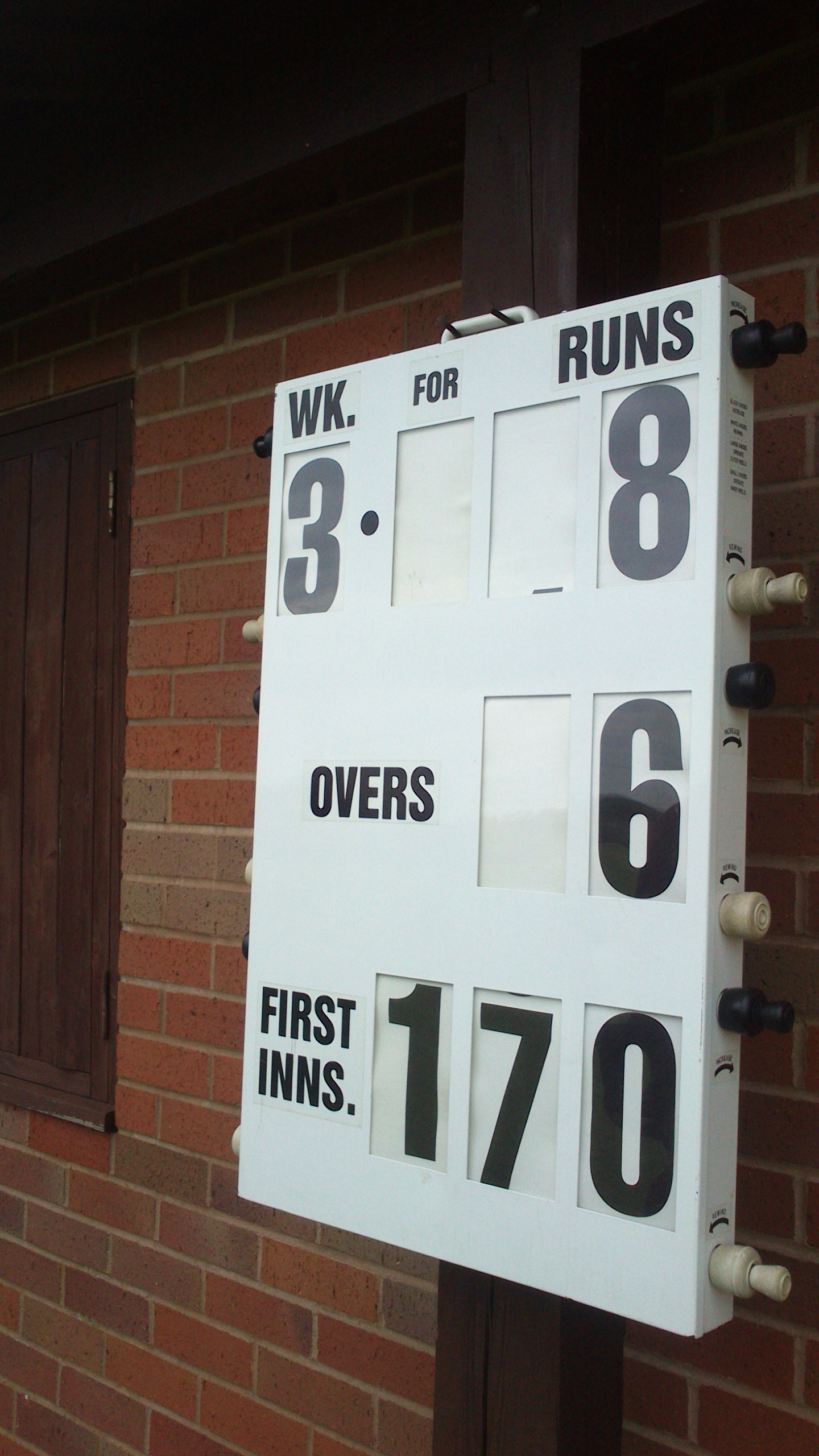 Some late substitutes and the sight of the Chairman’s shiny new shoes (from Warwick Sports), greeted our first visit to Marton for a ‘home’ game. The pitch looked reminiscent of last year (a bit in it for the bowlers), but mercifully the outfield less boggy, and with the weather dubious at best the toss decision was not an easy one, but given the line-up we took to the field after winning the call.

Openers Tim Jolly (17/0) and Simon Hawkins (14/0) kept an extremely tight line and several chances came and went, with the first of a few dropped catches spread among the team coming from the unfortunate Paul Johnstone. Several mortgages would have been risked on him taking it as he would 99 times out of 100, but it wasn’t to be, but soon after the first change bowlers broke through and Paul Stacey’s (3/16) spell down the hill was destructive and deserved more wickets as Messrs Jones and Henderson not so much missed a chance but ignored as the ball fell between them at mid-off. Bowling up the hill was hard work and Richard Johnson toiled admirably picking up 2 wickets.  At drinks Marton were 43(ish) for 3(ish) and the pressure was beginning to tell, although a good total was difficult calculate, chasing anything substantial was going to be hard work.

A couple more wickets brought Marton’s secret weapon to the crease, the extremely clean hitting Jay who proceeded to take a liking to 2/3rds of the Pauls’ bowling (the hapless Johnstone and expensive Henderson).  Catching positions were suddenly on the boundary, which just wasn’t long enough in some directions to stop some huge sixes.  Somewhere in this melee, another monster shot was launched in the troposphere and the self-styled Safest Hands in Cricket (Simon Drage) approached from the long on boundary with utter conviction as usual.  However the ball’s interaction with the jet-stream as it re-entered from low earth orbit just pushed the ball far enough away from him that the extra stretch needed resulted in a crack that neither sounded nor looked good at all. Simon withdrew from the field saying his thumb ‘was pointing in the wrong direction’ and although bravely came back with an ice pack to save more precious runs later, it was sadly the last of him we will see on the cricket pitch for a while*.

A belated turn to the spin of R Jones capped Chris O’Reilly’s superb day behind the stumps claiming a sharp stumping, but the bliztkreig of runs of the last 20 overs meant a very tough 171 to win was required with injuries to Johnstone, Romyn and more terminally Drage making the job even tougher.

As we tucked into a very good Johnson tea (11/10 for the cakes Mrs J) a saviour in the form of Nick Saunders who had come to spectate, but thanks to the generous sportsmanship of our hosts was allowed to make a mercy dash for his kit and bat for us later in the piece.

Which was a good job because shortly after tea had concluded, things went from bad to worse in the already hard run-chase. A second ball duck from today’s stand-in skipper Henderson, followed by Paul J’s stumps being splattered and crocked Pete Romyn’s stay at the crease being cut short we were 8/3. Chris and Sandy  had to start rebuilding and managed to frustrate the opposition as the wind got stronger, colder and the pitch continued to provide more than enough to interest the bowlers.

Nick returned in the nick of time and when he joined Paul Stacey at the crease a big partnership was needed with the scores almost identical after 20 overs, but we were more wickets down…

These two delivered just that, with aggressive strokeplay and opportunistic running between the wickets. The game was back on and although the run-rate required was high, as the pressure mounted mistakes started to be made by Marton.  Somehow the boundaries started to come and even 4 overthrows came as nerves started to shred. Paul was finally out for 31 but a cameo from former batsman of the year Simon Hawkins (23) made in quick time still kept the game very much alive.

Wickets continued to fall in the closing overs and the equation finally became impossible only in the last over as it proved just too much for Nick (42 no) to see us home.

It was a great game to play in and thanks to the spirit in which it was played, allowed a close result and we’re already looking forward to the rematch in a couple of weeks

*After considering the possibility of waiting for Marton’s resident (rectal) surgeon Simon Drage decided to take his chances at A&E, only to be diagnosed with a a double break and a bit chipped off for good measure.  He’s had an operation to pin the bones, remove the offcut and straighten it back to normal and has temporarily been reduced to the ‘Safest Hand in Cricket’. Never fear, during this hiatus, he’s intending to brush up on his umpiring skills, so watch out if you’re at the other end as his trigger finger might be itchy…