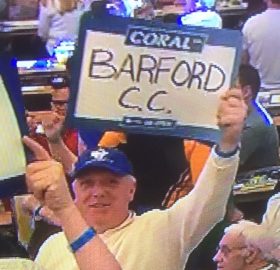 Will Morgan starred in an outstanding team performance, as a 10 man Barford overcame Great Alne.

Skipper Drage won the toss and cannily elected to bat, knowing from past experience that the setting sun would make batting tough late in the day. The captain biffed his second ball for 6 before settling into a more sedate rhythm against very accurate opening bowling on a wicket with variable bounce. Sandy was stoic in defence and the pair moved to 21 before Simon played on. Enter Kev who played watchfully before pulling out the big shots, including another enormous six out the ground. The ball was never found.

Neil Forrest looked good for his 13 before being caught and bowled and Rob Davies played with aggression but couldn’t stick around. Kev was finally out for 36 and Paul Stacey, Jon Lambdon and Will Morgan all failed to bother the scorer much. With the score less than 100 and 12 overs of the innings remaining the final pair of Hawkins and Jones were left to mount a rear guard action. Richard was in sparkling form and we managed to marshal the score to 128, using all of the 40 overs.

Although it’s a small ground, the outfield was incredibly slow and, over tea, the opposition were adamant that it was defend-able total. We felt it was probably 20 or 30 short.

Paul Stacey opened the bowling and was accurate and hostile without much luck (as usual). At the other end, Will was on fire and soon amongst the wickets. He bowled 8 overs straight and gave nothing away, ending with the outstanding figures of 8-1-9-4. All 4 of those wickets were bowled, each hitting middle and leg. That was all forgotten however, when he went spectacularly arse over tit when chasing a ball down in the uneven outfield. Thanks for coming Will.

Rob Davies bowled an excellent spell without reward and, by that point, the situation had Jon Lambdon written all over it. Jon tossed up 8 overs of deliveries that came out the sun like Stukas and was very unlucky to claim only one wicket. Neil Forrest was outstanding fielding in the covers and Great Alne were running out of batsmen.

Having taken a fantastic catch behind the sticks, Kev passed the keeping duties to Jon and came on to bowl. In addition to picking up the final wicket he also took an excellent catch in the outfield. Simon D did an excellent job of keeping the pressure on with his field placings and Great Alne were finally out for 111 in the final over. A very good win.