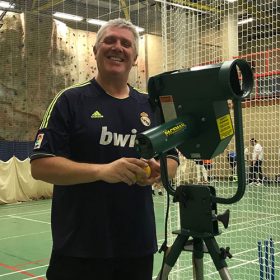 On a lovely sunny afternoon skipper International won the toss ( for a change ) and decided to bat. The opening pair of Drage and Boyce were pegged down a little at the beginning by some very nifty and accurate bowling. Cheaply Boyce lost his wicket for 4 to a brilliant catch by the keeper and In came Ben Linfield who soon started about his job. Drage was Incredibly unlucky to get himself out by playing on. The sixth different way to be out this season already. How many
others are left ?, ha ha. This bought Kevin Tobin to the crease with the score on 40 for 2. Linfield ( wow that boy Is fit and can run ) added 35 which didn’t Include any boundary’s, whilst his batting partner, now half a stone lighter with all that
running In the heat, ha ha, was doing It his way. Smash boundary, smash boundary smash boundary, you get the Idea. Hadley and Cook played superbly In batting around and supporting Kevin and he was desperately unlucky to be finally bowled on 94. To be honest I don’t think he had anymore strength or energy left to be able lift his bat up and was totally exhausted when walking off. Well played mate, that
was a superb Inning’s especially In that heat. Phil came to the crease with a few to go and added 4 before being caught off the final ball of our Inning’s. That along with Kev’s magnificent knock helped push us over the 200 mark for the first time this year.

Chasing 217 to win Lapworth came out to bat and Drage opened the bowling with Will Morgan and Tim Jolly. What a great start as Tim sent one of the openers back to the pavilion without troubling the scoreboard. James Patterson replacing young Will
took one and Ben Linfield replacing Jolly bowled superbly In taking 3 for only 15 runs. Although Lapworth had lost a few wickets their opener was still there and scoring well and they were certainly still In this game. Something had to be done to either break or contain the partnership that was beginning to build. The skipper had a cunning and devious plan and then right on cue the sun reappeared from behind the clouds and It
was time to Introduce the day’s tea maker Into the attack. Enter Jon Lambdon. The slow bowling, donkey dropping, pie chucking, self declared spinner ( tosh ) utilised the
sun to maximum effect and totally put the breaks on Lapworth’s run chase. He even managed to pinch a wicket for himself as the batsman clearly couldn’t see It falling out of the sun, ha ha, and finished with figures of 8-0-18-1. Well done Jon and an excellent tea as well mate, many thank’s. Now whilst Jon was holding up one end Hadley, Cook and Tobin nicked a wicket each from the other and at the end of Lapworth’s Inning’s they had reached 160 for 9. In all fairness I should just mention that Phil Morris took a brilliant catch whilst standing up to Kevin Tobin, It was the closest thing to real cricket that happened all day. There you go Phil, your BIG SHOUT, ha ha.

Well that’s how I remembered how everything happened.