Come on you Hares! 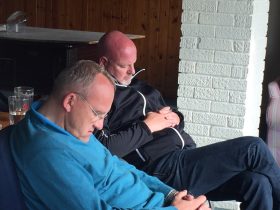 Barford dominated a strong looking Ashorne side to record our first Sunday win of the season.

Batting first, our opening pair of Alistair Boyce and Chris O’Reilly weathered a storm of accurate bowling combined with variable bounce. Alistair picked off the occasional full ball with a series of crisp drives down the ground whilst Chris played a more traditional anchor role (at least I think that’s how the spectating Simon Morgan described it). Alistair was out for 34 in the 15th over, with the score on 58 so a solid platform had been laid. Ben Linfield batted aggressively from the off, with continued support from the sticky O’Reilly. Chris eventually came unstuck for 31 in the 28th over, but Ben pressed on with the help of cameo performances from Simon International, Tom Hase, Ben Cook, Paul Robbins and, to a very much lesser extent, Alistair Cutler. Our final total was 174-6, with Ben 64 not out.

After an excellent debut Cutler tea we were straight back out and Alistair C soon nipped out Vijay (formerly of this parish, now blessing Ashorne with his talents). After a period ruminating his food, Tim was bought into the attack and struck with his first ball. It was the first of 4 almost identical, classic TJ yorked wickets which knocked the stuffing out of Ashorne’s chase. Ben Linfield chipped in with a wicket and there were two for Paul Robbins and one each for Tom Hase and James Paterson. Ashorne were never able to build the partnerships that we enjoyed and were finally all out for 95.

It felt like a really strong team performance with everyone chipping in at some point.