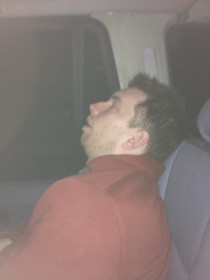 Firstly, never trust the weather forecasts, it was great credit to OMAFM that not only did we get a game on (thanks in part to their excellent artificial wicket), but a whole game at that, barely interrupted by potentially apocalyptic conditions swirling around.

So on a ground where a young Moeen Ali scored 195* (in a T20 game…) could Barford repeat last year’s success, with the advantage of 11 players this time? Well success at the toss and it was time to pile on the runs with the opening pair of Sandy Peirson and Kevin Tobin. When it comes to piles, Sandy is your man, but unfortunately in first over, he succumbed to Sharif’s slippery spin, bringing the man in form Ben Linfield to the crease.

Kev and Ben set about blunting the OMAFM attack, which was made harder by the ‘out-of-bounds’ area on the short boundary which meant that if the fence was hit or cleared it was 6…but out. On the other side of the ground the enormous boundary and damp outfield yielded a handful of boundaries all day, so plenty of running had to be done. This played on the minds of batters throughout the day, and Kev was caught in two minds (literally) off the bowling of Healey in the 5th over bringing in Jake Farquar to the crease.

Top-loading the batting order with heavy hitters didn’t work this time as Jake was bowled for the second duck of the day. This meant that the batting colossus and super sub Will Morgan came to the crease with the score wobbling at 16/3. In a new performance related pay system, Kev foolishly promised some monetary rewards for runs from young Will and boy did it work! He patiently complied runs with Ben in exactly the way his dad doesn’t. Seeing off the dangerous Healey and Sharif Ben and Will unfurled some sumptuous shots and ran the 3’s as the ball time and time stopped short of the boundary. Will was out at the half way point having rescued the innings with a superb 68 run partnership and the score on a much healthier 84/4. As skipper for the day I knew we had to push on, but I reckoned any score over 150 would be tough to get and watched happily from the other end as Ben press the accelerator and move effortlessly to within sight of his second century.

Unfortunately a mini collapse saw us fall back to 132/6 with Ben out for a great 91 and 14 overs left to get us up to a really competitive total. Ken and Tom went about this keenly and a put together a rebuilding partnership that steadied the ship. Rob went about punishing the bowling too and made a vital 22 runs at No 9, leaving Simon ‘The Finisher’ Hawkins chalk up another not out to close the innings with a very defendable 197 runs on the board.

Another top tea with warm samosas and hot tea that warmed us up, and after a slight delay for a passing monsoon (our only stoppage of the day), we went out determined to make the most of our batting effort. And what a start from the metronomic Hawkster striking in his first and second overs with Anderson-like accuracy leaving the Mo’s reeling on 12/2. at the other end, tempting the batsmen with heaving Timms over the short but deadly boundary was working to a certain extent after an expensive first over, but the experience OMAFM batsman used the shorter straight boundaries cleverly , but more great groundwork from Will (fielding in exactly the way his dad doesn’t), Jake and Ben stopped the Mo’s running away with it.

Will also came on to replace the Hawkinator (bowling in exactly the way ……you get the idea) and Tom Hase has also provided some control at the other end. more importantly he made a crucial breakthrough thanks to a catch-of-the-season contender at square leg from Ben Linfield diving full stretch, one-handed to remove Frost for 27.

This left the game very delicately balance at drinks, bang on the target run-rate at 99/3 but with only 10 men there were only 6 more wickets to get…. Time for another change of bowling and to see Ben start contributing properly to the game after ‘only’ getting 91 so far and taking a brilliant catch. He reeled off over after tight over, which was a good job because at the other end your skipper was being a tad more expensive before snaffling a couple of wickets including top scorer Mo for 75 with a pinpoint catch by Simon H. Kenny G got in on the act with the first of 2 solid catches and some great chasing down the laser-like throws at the stumps.

Tension began to ratchet up, 118/5, but runs still coming at a decent rate for OMAFM, every run bringing them closer to what would be a fine victory. Magnificent diving efforts in the field from the likes of Sandy and Jake just evaded their bucket-like hands and Ben decided not to rely on his fielders and nailed another Old Mo LBW. 126/6 in the 28th – 62 required off 12 …

Rob did his best to provide an even closer finish and into the 35th over, just 40 needed off 6, a few lusty blows and we were in danger of snatching defeat from the jaws of victory , but Kenny G hung onto another corking catch off Rob’s bowling and the pressure began to tell. Ben bowled the dangerous Sharif in the next over and Simon finished off the innings with a plum LBW to bring him his 3rd wicket of the game.

34 runs was the margin, but it felt a lot closer than that out in the middle and everyone contributed to an enjoyable win on a day which could easily have been lost to the weather. It’s hard to look beyond Ben’s 91, catch and 2/18 bowling for MoM, but his son wisely slept through most of it so he will just have to tell him some bedtime stories of another Barford end of season win.