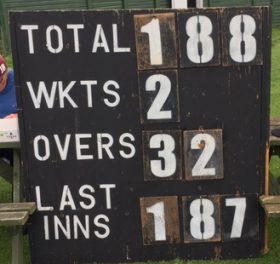 Barford today notched up our second remarkable victory on the bounce, with an excellent 8 wicket win over Stoneleigh. Opposition skip Neil Carter won the toss and elected to bat; the Stoneleigh openers made steady progress despite James Beaven and, subsequently, Paul Stacey repeatedly beating the outside edge. The first wicket fell on the stroke of drinks and with the score on 73 when Paul finally got justice for his efforts and staring with an LBW decision. Jon Lambdon, for whom the situation was written all over, then quickly dismissed the dangerous Stoneleigh number three with a caught and bowled. Paul got in on the c&b action with a very sharp return catch to end with figures of 8-2-21-2. Gary Dunn arrived late, which gave Andrew O’Reilly the chance to make his Barford debut as a substitute fielder. He made some excellent stops and throws and will definitely be a big player for the club in the future.

With his whites freshly on, Gary was almost immediately into the action bowling and sent down a really good six over spell – he was unlucky not to get a wicket (Layla we need to talk about how run outs are recorded in the book) although there was a run out following some sharp PJ fielding. Ben Linfield bowled through to the end with his 7 overs conceeding only 10 runs (the less said about a couple of dropped catches the better) but the remaining Stoneleigh opener (72 not out) and their number five (50 not out) farmed the strike well despite the usual ferocious Timmys onslaught. They ended on on 187-4.

Tea was a lavish fajita based affair provided by Mr and, to a very much greater extent, Mrs Lambdon (making a cricket tea basically equals a common law marriage contract). As the last tea of the season it was a strong contender for the club’s most prestigious award.

Skipper O’Reilly and Ben Linfield opened the batting and made brisk progress until Chris fell to an extraordinary left handed diving catch by Stoneleigh’s Saturday skipper. That bought PJ to the crease. Over the years many of us have been tormented by trying to keep up with Paul’s quick running between the wickets so there was a certain pleasure to be had in watching him receive a dose of his own medicine as Ben pushed for threes on a slow outfield.

As the total passed three figures and Ben passed 50 a carnival atmosphere developed amongst those of us watching, with only one question on our lips – would George Linfield get to see his Dad make a ton on his first visit to the ground? The answer was yes as Ben cruised to his maiden Barford century. It was a fantastic knock notable for a lot of powerful hitting down the ground. George celebrated by getting hiccups. With only a handful of runs needed PJ (42) fell to another amazing catch by the same fielder who’d caught Chris, leaving Jake the unenviable task of finishing things off. Ben ended on 109 not out as we reached the target in the 33nd over. For once the middle order power house of Gill, Beavan and Stacey were not needed. 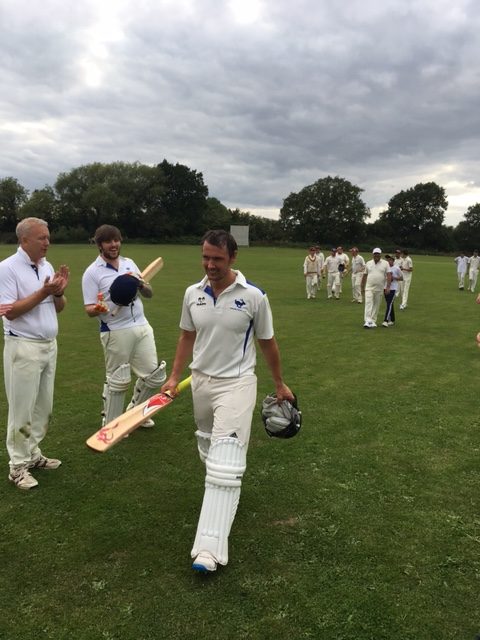 Paul and Ben’s partnership was worth 128 (joint 15th highest in the club’s history, partnership stats fans) and Jon subsequently worked out that they must have run over a mile each.

Quote of the day was from Jon who said “I’m polishing the crown” as he vigorously rubbed the ball on his groin. What a time to be alive.