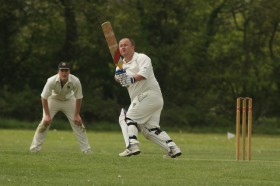 It was an overcast but dry start. The Aussie Marton Skipper and I went to the surprise grass wicket prepared for us and the call of tails yielded yet another defeat for me as Captain in a 2 horse race. We were to field.

Knowing we struggle against this accomplished team I opened with Simon Hawkins down the hill and Ben Linfield up it. It didn’t take too long for the current bowler of the year, Simon Hawkins to make his mark. However, his wicket came courtesy of some excellent quick thinking wicket keeping from the new rising star Kevin Tobin, who quickly rolled the ball onto the stumps from the gloves for a clear “stumping”. He looked a good batsman and so we were thrilled. Soon after the Hawk split the stumps with a terrific display and Marton were 2 down for just the teens.

Rain stopped play for about 1.5 hours and the match was reduced to 35 overs each. We enjoyed a lovely Mrs Lambdon tea early during this break.

A fine batsman came in at 4 and quickly set about a few runs. It took a bowling change or two to see the next wicket fall. An excellent catch by James Paterson in the gulley off Lammy’s bowling.

Whilst the fine batsman was hitting runs in came another fella that’s been a thorn in our sides before. Skipper’s responsibility taken seriously he bowls himself after a great little stint from the Son & heir. With some helpful fielding advice from Lammy a man was placed strategically in cow corner – squared – and young Ben Cook caught the man in the deep.

Seeing the Aussie skipper come out bought about a game changing plan bring back the strike bowlers. So on came the supreme Ben Linfield and the Hawk. A terrific ball saw not only the bails flying but the Hawk’s signature celebration as the Aussie was sent packing reasonably cheaply.

A quick run out by Ben Linfield in the field and good keeping again saw them reduced to their last 3 wickets given they were playing with only 10 men. Ben then bowled a jaffer for a well deserved first wicket and we just had the wagging tail to go.

On comes the go to bowler. Tom Hase first ball top of off stump gets a great wicket and after some rubbish gets the last too LBW. We are to chase down 177 all out.

The batting order was a little unorthodox but a twist Barford style. Young Ben Cook after his 3 ducks in the 6 aside was sent in to open. He did terrific, and batted with maturity beyond his years – for a bit anyway. At the other end Ken Gill quickly rattled off a 2 and a 4 followed by the swipe to a straight one and bowled.

Batting 3 was James Paterson. The two lads started off with great maturity, playing defensively to the straight ones and taking quick ones and twos to the offside. Sadly a rush of blood saw young James returned to the pavilion playing across the line to a straight one!

Tom Hase at 4 was struggling with a niggling Achilles but had some lovely finishing poses. Then Ben clubs a ball over square leg for 2. Following up with a drive to mid on – airborne – to lose his wicket.

Ben Linfield at 5 comes in. I’ll come back to him.

Tom sadly loses his wicket only to be told to hurry up getting his pads off as he needs to umpire. In comes Kevin Tobin. The two lads looked good, Kevin clubbing several quick runs including a four and Ben majestic at the other end. It wasn’t to last and Kevin was sent back again playing across the line to a straight one on just 9. So it was up to the skipper. I came in with so many thoughts and good intentions, a bad ball seen and cut away for 2 runs. Followed by a straight one which I played a beautiful forward defensive shot to. Sadly I missed it between bat and pad and away go the stumps again.

Simon Hawkins was next to steady the ship. With Ben still rattling off the runs. He looked in decent nick and was in a while for his duck. So Lammy, can you save us again. Simply put no! He also stuck at it and celebrated his duck as the first wicket that wasn’t bowled. He was caught by a good catch at slip. TT under pressure to stay in for Ben. He did just that but not before clubbing a ball for a brilliant 4.

Ben got his fifty and soon afterwards the game ended with TT unluckily caught behind in the slips. Barford were all out for 100 runs some way short of our target, but Ben got a terrific unbeaten 50 and we enjoyed ourselves.

Of note, they really are too good for us BUT they did not understand the relationship between the rain and the height of the swallows flying above us. We obviously had TT at hand to educate the youth, on the reasons why you should never take the covers off too early especially when swallows are flying well above the tree line.

TFC – Marton because they are just too good for us.

MoM- Ben Linfield for a terrific innings, but Simon Hawkins should also be celebrating a terrific bowling performance that only Ken knows why he’s not buying a jug.

A fun spirit, a youthful side fell short but should be proud that we believe we have bowled out Marton for the first time in our history.