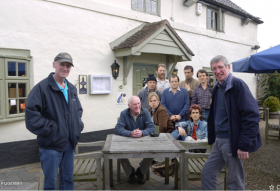 The old farts have once again returned successfully from their reconnaisance mission deep into enemy territory, and the Tour Secretary has submitted the following unexpurgated report:

The picturesque village of Redmile provided an unusual detour on the return recce to Oakham as I finally visited a filming location of my favourite TV series ‘Auf Wiedersehen Pet’.

For the less seasoned reader, this comedy drama focussed on a disparate group of builders trying to compete with the faceless 1980’s corporates like Wimpey, McAlpines and Colin’s Construction, with varying degrees of failure. During the early part of 1986 they were billeted in The Barley Mow pub in a Derbyshire village while they renovated the fictional Thornley Manor-hence we found ourselves on the doorstep of The Windmill, in the Leicestershire countryside.

After mourning the loss of my youth (and mullet) we headed over to The Chequers at Woolsthorpe for lunch. The pub has fond memories for Richard Jones as he played on the adjoining cricket pitch as a fifteen year old and broke a roof tile with a towering six (coincidentally, The Titanic set sail from Southampton to Cherbourg on the very same day). The Chequers does excellent food, the only downside being that they advertise a ‘Campari Sunset’ on their cocktail board-the chairman ordered one but felt that it spoiled the natural flavour of the aperitif (a bit like adding water to a 100 year old malt-well, maybe not).

Replete with fine food we moved on to North Luffenham, the main reason we managed to justify this trip. Age seems to be taking its toll as Messrs Jones and Fisher had no memory of the ground, despite playing there sixteen years ago. The large, sloping tree lined oval is similar to last year’s Sunday venue, but hopefully our performance won’t be!
On arrival in Oakham we felt it was unfair to head straight to The Grainstore without giving some other pubs a chance so we called in at The Lord Nelson. After being largely unimpressed by the round (except mine which was lovely, so not all bad eh) we set up camp at The Grainstore where the Ten Fifty (and several large Grouses-you know who you are) was top notch, as usual.

Dinner consisted of tapas at Bakers Yard, where we are scheduled to have our Saturday meal (if Drage and Dunn ever bother to send me their choices) at which point I lost my voice due to a chest infection and cough, much to the amusement of the team, but not the chairman who only got one hour’s sleep due to sharing a room with an asthmatic pit pony.

Everything looks good so far

Ed: further photographic coverage of their adventures can be found here courtesy of Mushie