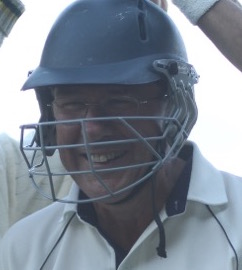 Pete Romyn has been a faithful servant of Barford Cricket Club for more years than most of us can remember. He was one of the original “lifers”, whose injection of funds ensured the clubs survival through difficult times, and yet by playing on for over 20 years he cannily ensured a small profit on the deal(!) He also served conscientiously as club Secretary during the difficult negotiations at Hareway Lane. He always played with a smile on his face, unless he’d just tweaked something, but was perhaps never happier than when settled down with a cup of tea and a cake at the break.

His predilection for timed games did set him apart from most of his team-mates, and his method of play never really adapted to the bash and crash of limited overs cricket. However, an encyclopaedic knowledge of the laws meant that he was always the first to be consulted on some of the more obscure aspects of the game and underpinned his re-invention as a league umpire.

His last match at Radway was captured by our celebrated paparazzo and shows of the full range of his unique cricketing abilities (or perhaps not). 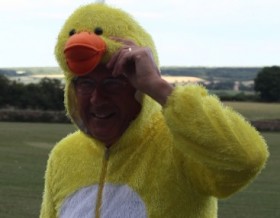 Sandy Peirson delivered a touching eulogy at the Annual Dinner, but as the majority of it was potentially libellous and fairly unprintable (revealing the Chairman’s unseemly fascination with thongs), it is unlikely that it will ever see the light of day again. In it’s absence the following doggerel has been offered up by the Treasurer for your delectation and delight:

Pete Romyn like a very fine wine
Gets better with age unlike Simon Drage
Who’s yet to turn 40 or so we believe
He celebrates next year on Saturday eve.

But back to young Pete. The stalwart and lifer.
Paid up his subs and traded his wife-for
retirement of golf and leather on willow.
So much that he sleeps on the spare bedroom pillow.

He knows all about laws and wides and no balls.
In a quandary of umpiring? Pete takes the calls.
Are you out if the batsmen cross running a three
when the ball comes back in and gets stuck in a tree?
Or what about LB when no shot is offered
but the umpire was sleeping so’s simply not bovvered.

His on field prowess is unmatched ‘cross the lands.
He fields with holes in his feet, side and hands.
He bats with aplomb and maidens fly by.
Serve a buffet? He’ll block it and keep out the pie.

But his bowling pays dividends. Just check out the tour stats.
Bowled 2 for just six runs and kept out the big bats.
He won us the match with some help from the rest.
He was MOTM yes the best of the best.

He almost scored 50 a few years ago.
Batting fifth out at Napton the old Barford foe.
Young Romyn, only 62 playing on fire.
The score rising higher and higher and higher.
When he reached 48 hit the wall. Blocked a few.
Then the innings ran out, on came tea and a brew.
But he still bought a jug for the team post the game.
What a jolly good fellow! Romyn is the name. 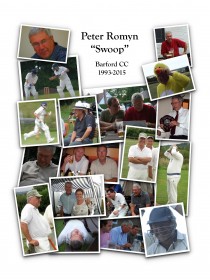