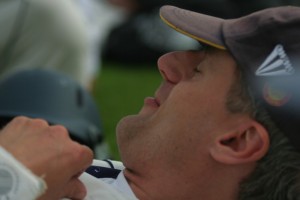 By now I’m sure you will have caught the minutes of the AGM as the final act of the outgoing Secretary. Having been elected (surprisingly unopposed) into his shoes, it would be churlish not to comment on his tenure over the last eleven (yes, really!) years.

Simon has been Secretary of Barford Cricket Club for as long as Lionel Messi has been playing professional football, and I think it’s pretty clear who’s made a bigger impact on the world stage. Since when did Barcelona’s diminutive No 10 ever stroke the ball through extra cover or deceive a top order batsman with his slower, back-of-the-hand delivery? Let alone drag the kit-back around in his boot for most of the season or hand craft a banoffee pie for the pre-season party? To be fair, the Hawk has only chalked up the last two, but there’s always next season.

It’s hard to think of anyone who has done more to keep Barford going through the last few years including the turbulent moves away from Hareway Lane and then Leek Wootton to our current haven at Snitterfield. He’s notched up batting, bowling and the elusive clubman awards on numerous occasions and is usually omnipresent at nets and available (if selected) for the majority of matches throughout the year. He has been the veritable heartbeat of the club for a number of years, and all this despite living miles away in the depths of Coventry.

Fortunately, Simon won’t be “doing a Romyn” (at least this year), and with the burdens of administration removed from his shoulders we should be expecting some spectacular performances on the field of play next season – no pressure…