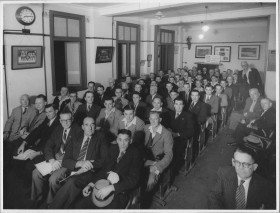 Following the recent email to-ing and fro-ing over the details, esteemed Club Secretary and next seasons “go-to” bowler, Simon Hawkins, has kindly finally provided the web-friendly version of the minutes of the recent Annual General Meeting here. As usual it’s a crackerjack of a read, capturing the heady atmosphere of several old farts talking beer-lubricated rubbish until the sandwiches and chips arrived.

However, for those of you who don’t want to brave the details, or see yet another picture of the Treasurer feasting at the trough, a pithy summary is as follows: