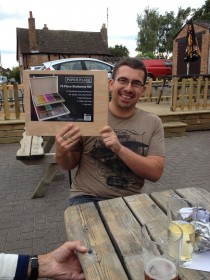 A small but doughty band of Barford’s finest congregated at the Joey on Saturday night to wish the Lambinator “bon voyage” as he departs to the cricketing hotspot of St Helena, where 10 teams fight it out for bragging rights. Hopefully he’ll be returning to the fray after a couple of years teaching Maths to the island’s schoolchildren, whilst passing on his idiosyncratic musical talents and his infectious enthusiasm for the noble game – although the fact that criggit is the national sport in St Helena should mean he is pushing against an open door.

Your scorebook is a masterpiece,
it should be in the Tate,
And anyone who sullies it
we know you really hate.

Your batting is quite legendary
and it’s really no surprise
That your revolutionary spinning
has won the Turner Prize!

And when Laminator’s fielding,
I think we’re all agreed
It’s rather like Tom Daly
who’s overdosed on speed!

And when you dive as Wicky
and rock our fragile planet
It’s rather reminiscent
of a rather greedy gannet.

So, we’re rather sad you’re leaving-
you’ll be mentioned in despatches,
you’ll have lots of time on ship
to think of many fumbled catches.

So as you teach on St. Helena
with a sad nostalgic heart,
Think of us in merry England
and like Napoleon Bonaparte

Do not dwell on Wellington
Or the Battle of Waterloo
But dream of scoring 50
or taking 5 for 22!

We thank him for his great contribution to the club over the last couple of years (it’ll certainly be quieter in the field without the call of “Jon’s backing” echoing around), wish him well and look forward to catching up with our exile at the annual dinner when hopefully the wonders of technology should ensure his virtual participation at our festivities..