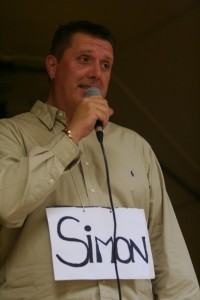 From our correspondent Simon International:

On Sunday we travelled to the beautiful little ground of Alvechurch. It was a new addition to our fixture list and one I hope we can retain for next year as our hosts made us feel very welcome, prepared an excellent wicket, provided us with a superb tea and played the game with a great spirit.

So skipper Griffin lost the toss again, I really don’t know why he bothers? He could save himself the walk all the way out to the strip and the pointless chit chat on the way there and back by just saying ” Tell you what mate, you just tell me what you want to do and that’ll be fine “.

Anyway we were asked to bat and off went Richard Johnson and James Wilson. The wicket looked superb for batting though Richard didn’t last too long, caught by the guy who stands just to the left of the bowler, mid on or off, I don’t know. That bought the in-form skipper to the crease and he and James soon starting smacking the ball all over the place. It was raining 4’s and 6’s and we had reached 70 odd in only 9 overs (that’s very fast for us). But just when it looked like they were both going to bat all day James was gone, bowled for an excellent 37.

This found young Will (with a tear running down his face) out to bat. The thought of leaving Shawn for a while at the side of the pitch was just too much for him to bear (bless). Still the tears of pain turned to tears of joy as 10 overs later Will was again crying as he reached his maiden 50 for the club. I must say that the sight of Shawn running onto the pitch to embrace his special friend even bought a lump to the back of my throat and just for a solitary moment even I forgave them for being a pair of screaming queers, ha ha. Well batted Will.

Unfortunately the rush was just too much for the youngster and he was out next ball. Still he had done enough to buy a jug at the end of the game and that’s all that matters. Next in was International and it wasn’t long before he was registering the longest 6 of the day and chalking up another lost ball -there wasn’t enough time to walk to Shropshire to go and fetch it. Sadly for himself and the people who had paid to watch him put on a show of big hitting that was it as he fell next ball after having played on.

Now don’t forget that while Will was batting and then International the skipper was still there going about his business of scoring runs with ease and after a promise from International that Ben could keep his bat if he made another century that’s exactly what was on the cards. Enter Jake the spoiler and the dodgy umpire not wanting to lose his bat, International. From the sidelines that’s exactly what it must have looked like as Jake faked a run, Ben found himself stranded and desperately tried to get back but a deadly accurate throw and an umpire who was about to lose his trusted Samurai added up to Ben being run out about 20 short of a ton. Another great knock skipper, well batted.

Pete Romyn joined Jake and both added double figure scores to the Barford total before Jake was bowled and Pete was caught. Shawn (Little Rabbit) Harrison came out to bat but you could see that he was still emotionally choked after watching his shadow bat earlier on in the day and perished with a TFC threatening duck. That left Phil Morris and Richard Jones to see out the Barford innings which they comfortably did and we finished on 227 for 8.

That was our highest score of the season so far and thing’s got even better when we all tucked into the best tea of the season so far. Hamilton had just won the GP the Dutch won at football the night before (I bet them at 20/1) and we were unusually in a comfortable position at the half way stage. This was a good weekend but could it get even better?

Opening the attack was Griffin and Johnson and we soon had the home side on the back foot as Griffin struck early removing the dancing around opener. Not to be outdone at the other end the impressive Johnson bowled a devastating 8 over spell which the paying public just loved as he recorded brilliant figures of 8-3-12-3. The home side were reeling at around 35 for 4 after 15 overs. Bowling changes bought Jones, Wilson and Perry into the attack and while Richard made his usual contribution of at least a couple of wickets, James and Will were unlucky with a few dropped catches. Now I’m not the kind of guy who would point the finger or name names as we play, win, lose or draw as a team. But see if you can work this out – sounds like Dawn Garrison, had a shocker in the field attempting to catch the ball on several occasions whilst trying desperately to secure the TFC award, ha ha.

With only 4 wickets left to find the skipper gave Shawn the chance to get himself out of jail by bowling at one end and Tony Timms at the other. It was Tony who struck first with his quicker delivery after setting the guy up. A piece of inspired bowling had left us now only needing 3 more wickets. Tony struck again, we needed 2 and Rabbit needed a miracle. But was it going to happen as the Alvechurch captain mullered one which had 6 written all over it but thankfully for Rabbit the safest hands in cricket underneath it. The prize wicket had fallen and within a few more deliveries a now revitalised Rabbit claimed the final wicket, cleaned bowled. Our host’s were all out for 133 and Barford had notched up another morale boosting victory before we head off on tour.

While having a drink after the game and a chat with the oppo’s captain it was decided that the man of the match should be awarded to Ben Griffin and the TFC be awarded to, wait for it, Little Rabbit. After all his hard work trying to redeem himself he still ended up being voted for. This angered the little fella who immediately quoted the club rule book and sure enough in paragraph 3 of section 2 there is a clause which say’s if a player is unhappy with being awarded the TFC he can demand a vote by fellow player’s from that day’s team on who is awarded the TFC from a shortlist of two. So after deciding it was a straight vote between Shawn and Phil the votes were cast and to Shawn’s relief Phil Morris picked up the award of the TFC and took it on the chin like a true gent.

Well that’s how I remembered everything happening.