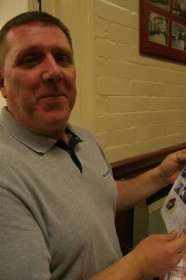 From our correspondent Simon International:

After all the rain we have had over the last few days it was no surprise that the wicket at Leek Wootton didn’t look a million dollars and the majority decision amongst the team was to field first. However skipper Griffin lost the toss ( again ) and we were asked to bat.

Things could not have started any worse for us as we lost opener O’Reilly in the second over with only 5 on the board. Double the overs double the runs and double the wickets as PJ fell victim to a excellent low diving catch that even I would have been proud of. This bought the inform pairing of Griffin and Henderson together though not for very long as Paul was out caught and we were rocking on 21 for 3 after 8 overs.

It was now down to Ben and James Beaven to steady the ship and get us back on course. That’s exactly what they did with a 50 run partnership before James fell just prior to drinks but not before hitting the games only 6. ( Awesome shot ). At the half way stage we were now 74 for 4.

The first over after the restart was not a good one for us as skipper Griffin fell to another catch but he had again batted superbly for his 38. This bought two new batsman to the crease in the form of Drage and Stacey and both sent a message of intent to the oppo by hitting 4s with their first deliveries. Some big hitting especially by Stacey saw the runs beginning to mount up and Wootton’s quickies were reintroduced into the attack.

Drage took one in the rib/kidney area and struggled to breath then Stacey went down like he had been shot and tore a leg muscle. Both refused to leave the field and with true bulldog spirit continued to fight on, though we did need the help of Paul Henderson acting as a runner for the crocked Stacey. More runs were added to the score before both fell to catches within a couple of balls of each other. A 72 run partnership was just what the doctor ordered and we were now on 149-7 with eight overs remaining.

Dunn and Sherratt stepped up and took over and Andy was unlucky with one which kept low but unfortunately was dead straight. This saw Tim take to the middle and with him some of the form he found in the pre season nets. Some lovely shots were played including a cracking 4 before being bowled by another pitch assisted delivery. Last man Richard Jones joined Gary and the pair added a few more potentially vital runs before our innings finished on 181-9.

Was 181 going to be enough? We would have preferred to of gone past 200 but the wicket was very unpredictable for us so if it remained the same for them it could be quite interesting. We knew we would have to bowl and field very well but we did it last week so why not again?

The attack was led by Sherratt and Beaven and although there were a few near misses and a dropped catch the batsmen seemed to be getting on top and at 35 for none after 7 overs it wasn’t looking too good for us. If only one of them would play at a wide one and knock the ball straight to Gary Dunn, we would have our first wicket.

The bowling change bought Jolly and Griffin into the attack and it didn’t take long to pay off. Ben getting an LBW decision at one end and then Tim getting one at the other. Both bowlers excelled and delivered devastating spells. Leek Wootton just couldn’t score any runs as Tim bowled 4 maidens on the trot including a wicket one while Ben was taking wickets with ease including a hat-rick opportunity.

Gary Dunn and Paul Henderson came on and did everything apart from take three wickets each as the batsmen of Leek Wootton just did not know what had hit them. In his final over Gary got his just rewards when clean bowling their number 10. It was now down to the master of spin Richard Jones or replacing the injured Paul Stacey, the club’s new stand in enforcer Simon Drage to take the final wicket. While Richard had them guessing what he was going to do next it was the enforcer who took the match winning wicket. After lulling the poor guy into a false sense of security by bowling two slower pies the following quick one totally caught him out and he popped up a dolly catch to the man of the match Ben Griffin.

We had got them all out for only 83 runs in 27 overs. Like the week before it was another fantastic all round team performance with everyone playing a part. Sadly we couldn’t ask our opposition for their vote on the man of the match and the TFC as none of them stayed for a drink after the game. So we awarded them to Ben for his 38 runs and 5 wicket’s and one catch and Chris O’Reilly for nominating everyone else in the team. Does that sound about right Chris ???, ha ha.

Well that’s how I remembered everything happening. Well played guys.