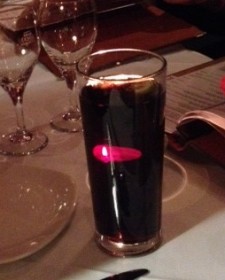 An intrepid band of Barford’s finest congregated in Warwick to enjoy an evening of beer and curry. The best that could probably be said about the beer at Wetherspoons was the price and the ale cognoscenti in the group will probably not be returning any time soon. Some hardy souls did try the 99p pint, but one of the rejected samples is probably still settling out…

The action then moved to Saffron where the extensive menu provoked heated debate, but not much enlightenment. For some unknown reason, the advance party of the new Social Secretary and his young acolytes had decided to accompany a bulk order of poppadoms with Diet Cokes rather than the traditional lager, and spent the next 20 minutes trying to cover their embarrassment! 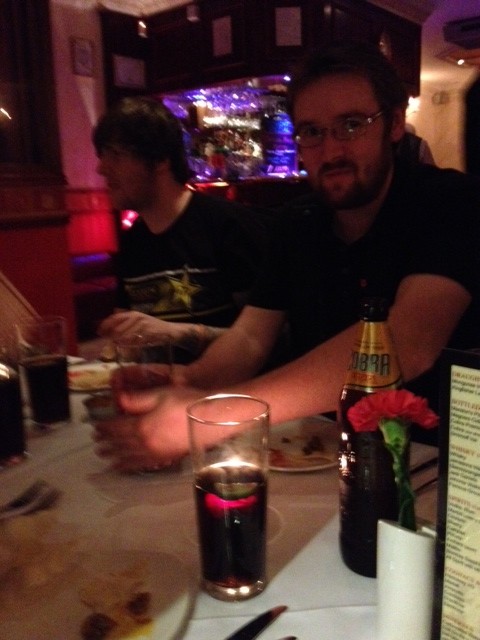 A good range of curry was sampled, although the Coventry professionals let the side down a little on the spice front and Jake now has a new nickname of “Korma Boy”. The evening ended with a quick trip to the Rose & Crown which offers a nice point and a great vantage point for checking out the late night taxi clientele! The chairman had composed a little(!) poem in honour of Simon’s first event, but forgot to deliver it in the excitement:

Ones first time is important
You’re in a nervous sweat,
Your sang froid has gone dormant
But you can surely bet
That butterflies are rampant
Within a heaving chest
They seem to have a penchant
For bursting out your vest.

A virgin’s nerves are natural
One’s not done this before,
All past, hard won, collateral
Has just marched out the door
( and ) if you follow in the footsteps
Of past masters like our Paul
You have to try to put steps
In place to break the fall.

So Si, this is your christening
As Barford Social sec
And I hope you’re coolly listening
And not a nervous wreck
For on this first occasion
You will be judged, – and surely
The cooking may be Asian
But Europe before the jury.

Now Simon has a history
But, on that, we will not gloat,
But it’s still a complete mystery
What ‘s happened to the goat!
But now, from dear Leek Wootton,
He’s pulled the lovely Kaye
And he’s no longer the glutton
For the wives of yesterday.

So now he quietly breezes
Where once he would have stormed
He’s careful who he squeezes
And says he’s quite reformed.
He’s no longer a voyeur
He states with solemn pledge
As another divorce lawyer
Goes crashing off a ledge.

So our esteemed committee
Tried to hide a nervous fear
And thought it quite a pity
That the only volunteer
For the recent vacant social post
To which we now allude
Thinks Nuneaton can’t be beaten
When drunk and semi-nude!

So Barford’s turning point has come
Regarding social dos
Simon follows young
James Wilson’s mum
When ordering the booze
And when it comes to curry night
It’s here for all to see
He must have just got something right
To tempt the likes of me
From the comfort of my favourite pew
With whisky, pipe and slippers
To be here, with the likes of you
And 7 Bedworth strippers (where are they Simon?)

So let you all rejoin with me
And thank him, at this stage
So raise a glass to an act of class
Mr. Simon Drage!