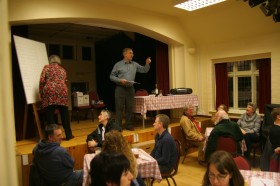 On a chilly St Patrick’s Day once again quizmaster Lusby took to the stage to challenge, confuse and amuse the assembled teams.

And those teams certainly stepped up to the plate in terms of nomenclature: from Morgan’s Spiced and 50 Shades of Grey (Matter) to Hey Presto and the Dark Side of the Moonies it turned out that competitors were almost as creative with their names as they were with their answers.

Amongst the usual rounds, Martin had snuck in a seasonally appropriate one on Ireland, and a geographical/technological one on Internet country codes which made the all important ‘playing of the joker’ even more crucial. For those born after 1985 and not familiar with such technology, the music round also featured an appearance of a cassette deck – google it if you’ve never seen one in action.

Luck of the Irish

Half-time was marked by the usual fantastic food with pasta dishes galore hand-crafted by the ever-cheerful ‘volunteers’, and a plethora of puddings that were enjoyed by the hungry quizzees. More time was given for poring over the Olympic gold winners who made up the picture round.

Loch up your daughters

And so the final round just had to feature a loch question and if you didn’t know that Loch Morar was the deepest Scottish loch then you weren’t even trying. But that wasn’t enough to scupper Richard Yendall and the Snitterfield team – ‘How Deep is your Loch’ who took away a well deserved first prize, narrowly beating ‘Half Century’.  The wooden spoons were claimed not by the French but by the ‘We Who Dare’ team, who didn’t dare quite enough unfortunately.

In a strange quirk of fate, those two teams also faced each other in the raffle prize, but the Snitterfielders couldn’t quite guess Kevin Pietersen’s test run tally as closely as the Half Centurians, so missed out on a total clean sweep.

It wasn’t just the picture round that featured our Olympic heroes, these events don’t just happen by themselves, so it’s a big thanks to everyone who came along, especially all those who cooked the fantastic food that was heartily consumed and everyone who help set up, serve up, wash up and tidy up.

Also of course to Martin and Sue Lusby for their sterling quiz double act, Simon Hawkins for keeping the bar running smoothly and Fiona Jolly for her efforts in coaxing excellent raffle ticket sales.

Next up it’s the Pre-season event until we do it all again next year.