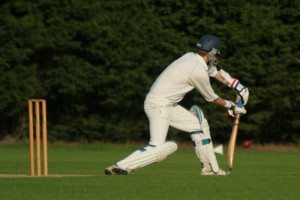 Barford found themselves back at Kenilworth Wardens for a second week against Christchurch (who still haven’t managed to play a game at their home ground this year!). The pitch was the same as the previous week but would hopefully play a bit better after a week’s more or less dry weather – so on winning the toss I of course chose to bat.

It didn’t take long for me to start regretting this decision – two balls in fact as Simon D was back amongst the garden furniture after “missing a straight one, hearing the ball thud into the keeper’s golves and turning around to watch his off-bail descend to the ground” (expletives removed). He was less than chuffed to put it mildly, but Jake and Matt started to repair the damage via a series of edges and lobs between fielders. Until that is, Jake decided to unleash a straight drive which Matt decided to field with his thigh, thus saving the oppostion four runs and rendering him prostrate on the wicket.

The bowlers were managing to extract both sideways movement and variable bounce from the pitch and Matt was soon bowled afterwards. Paul and Jake set about taking advantage of some loose deliveries and managed to post the 50 for the loss of only two wickets. However a combination of good bowling and some indifferent batting saw the next 4 wickets (Jake, Simon H, Paul and Nick) lost quickly as a succession of batsmen were castled by balls that cut back sharply and/or kept low.

Shawn and Mark, the Barford youth policy, hang around for a bit without scoring too much before little Rabbit lost his head (and his wicket) to a leg-spinner. Mark was also clean-bowled (making it 7 from 7), before Tim attempted a kamikaze run to square leg and was comfortably run-out by the proverbial country mile, much to the amusement of all those involved. Andy swatted some useful runs in his own inimitable style before relinquishing the strike to Tiger who was promptly caught at slip, to leave Barford on a disappointing 97 all out.

At tea I was still hopeful that are bowler-heavy team (all 9 of them) would be able to make some early inroads. Tim and Mark opened up tidily enough but without extracting the same life from the wicket that the oppostion had obtained. However, in evading (or trying to) a short ball from Tim one of their opener’s tweaked his back and had to retire hurt with less than 20 on the board.

I just knew it wasn’t going to be our day when Andy, replacing Tim, dropped a comfortable caught and bowled in his first over. He kept plugging away and bowled a tight if unthreatening spell. At the other end, Nick came on for Mark and bowled with great accuracy and some intermittent sharp turn. He bowled both of the set batsmen with classic left-arm orthodox deliveries, and finished with very respectable figures of 6-1-16-2.

We had managed to put a bit of a squeeze on them, but Christchurch continued inching towards their target. Shawn tried his luck and managed to get some prodigious turn when landing the ball in more or less the right place, but a few loose deliveries and some dropped chances by the skipper meant that the runs kept coming. Even Tony’s donkey-drops were picked off remorselessy as Christchurch squeezed home by 7 wickets with plenty of overs to spare…