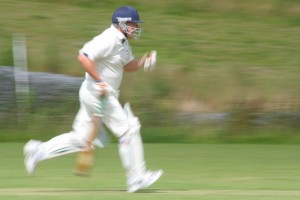 The best day of the year so far bought the Barford team together with the daunting task of trying to beat a Martins side for the first time in the clubs history. This was going to prove even harder after the skipper came second in the toss and not surprisingly we found ourselves in the field. The Martins team were going to take full advantage of a beautifully prepaired ( by myself and the Tango man ) batting wicket.

With plenty of bowling options to choose from skipper O’Reilly decided to open with Simon Morgan and Andy Hawkins. Both started quite well and apart from the odd one or two wayward ones which were duely punished kept the Martins openers rather quiet. Ironically in the middle of two good spells, it was the duff balls which bought wickets. One apiece for our opening two and it was Barford who had started the best. The bowling change saw James Beaven and new boy Nick Saunders take over the attack. Both bowled superbly and were so unlucky not to take more wickets than the one which James picked up. But what they had done was put the brakes on the Martins batsmen. A team who had previously hit 250 plus were struggling on 56 for 3 after 22 overs.

The skipper decided to keep spin at one end and introduced Richard Jones who bowled a full eight overs and use the medium pace of Gary Dunn and Mark Williams from the other. While Gary got hit for a few runs he was really unlucky not to pick up a couple of wickets as dropped catches cost him dearly. Though not as dearly as Simon Morgan as the catch he dropped off Gary’s bowling would later cost him the T.F.C. award. Mark’s bowling was neat and tidy but the damage was being done at the other end. Wiley fox Richard Jones again bowling beautifully and picking up another 3 wickets to add to his seasons tally. Richard Johnson was given a few overs at the end and not wanting to be outdone by anyone returned excellent figures of 3-1-1-8.

A superb team effort in the field had restricted the usual high scoring visitors to an all time low of 154/7 off 40 overs. Could there attack defend the total? That was the question going through everyone’s mind as they went for tea, and what a mighty fine tea it was too. I guess I have to say that, as I was the one who prepared it.

On such a glorious day and after having spent 3 hours in the field one or two people myself included wondered if skipper O’Reilly had caught too much sun when he asked me to open the batting with Mark Griffin. “Are you sure skipper, I’m not known for my patience at the crease you know”. But if that’s what he wanted that’s what I would do.

So chasing 155 to win me and Mark headed off to the crease. It was a slow, frustrating and somewhat painfull start especially for me as you all know I like to swing at everything. As Mark could see the tension building up in me he tried to keep me calm by telling me to keep cool and wait for the bad ball, but all I wanted to do was remove my glove and chew my fingers off to see if that was as boring and painfull as playing defensive shots, ha ha. Still the score was ticking over and we were using up the overs of the Martins quickies. The bowling change bought the luck Martins were after as Mark was unfortunately run out for 9. This bought Chris to the wicket with some crazy idea about running quick 1’s ans 2’s. Well if I ever needed an invite to hit boundaries that was it. Running in that heat, was he mad ?

Drink’s were served after 15 overs as it was such a hot day and a glance at the scoreboard showed that our innings was being perfectly paced as we were now on 39/1 and ahead of them at the same point. As we restarted it was time to hit a 4 here and another one there and so on as I really did’nt fancy the idea of running up and down and then to my surprise there was an almighty cheer and a round of applause from the home support as I hit 50. Yippee. I use the term yippee very lightly as I cannot print what I actually said to myself.

Chris however didn’t last much longer. The only consolation in being dismissed if there is one is that it was to an excellent one handed catch. Still the skipper had gone for 6 and it was time for James to join me in the middle. This wasn’t to be a lasting time together as after adding a few more runs to my total I was finally caught going for another big shot. Still we had 80 odd on the board just over 22 overs left to bat and plenty of wickets remaining. The platform had well and truly been laid, it was up to the other guy’s to cross us over the line.

Richard Johnson joined James in the middle and was a tad unfortunate to be bowled for only 6. All of a sudden however the pressure was on as after another quick wicket, in the back of everyone’s mind was surely this isn’t the start of another notorious Barford collapse. Not if Mark Williams had anything to do with it. Making his annual appearance for the team he was determined to stick around and score some runs. James was next to go after a great knock of 23 and at the next drinks break after 30 overs we were on 129-5 and edgeing closer to our target. New boy Nick Saunders was up next and if he could bat anything like the way he bowled surely he and Mark could get the 20 odd runs needed with 10 overs still to play. Six overs later we all gathered at the side of the pitch waiting for the winning run to be hit and with the second almighty cheer and applause of the day, there it was. Mark 21 and Nick 13 had steered the ship accross the line for a convincing and historic victory.

This has to be one of the best all round team performancies in the club’s history. Everyone played a huge part. The bowling was superb the fielding was great with only 1 or 2 minor blips and the batting was strong, paced to perfection and for once with no panic or a collapse in it. Ha ha. Well played guy’s. As for the fantasy awards the T.F.C went to Simon Morgan and while there were plenty of options for the M.O.M award it was given to me. If you have’nt checked up on the fantasy league in a while i’m lead to believe that Simon Morgan has been knocked off the top spot and that there is a new sheriff in town.