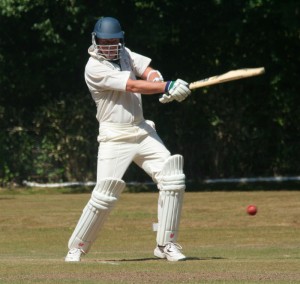 The first proper summer’s day saw an excessive outbreak of sunscreen and short wearing, and Barford taking on Rugby Oakfield at Leek Wotton.  Oakfield are a traditionally strong opponent and first impressions were not good as a succession of younger and fitter cricketers trooped into the opposition dressing room.   For some unknown reason (although I have my suspicions), I’d been selected to lead the motley collection of individuals chosen on a whim by none other than Captain Morgan himself.

Losing the toss was not an auspicious start but at least I had an excuse to give the team when they discovered they’d be running around in the heat of the day.  A couple of late changes meant that we were now definitely a bowling rather than batting side and so would be better off chasing than setting any targets (at least we’d make the game last until the tea interval).

The opening attack of Paul Stacey and Andy Hawkins set about the Oakfield line-up and suffocating bowling and fielding made sure that they didn’t get off to a flyer.  Andy Hawkins picked up a couple of clean bowled while Paul Stacey, justifying his tag of the “unluckiest bowler” went passed the edge and the stumps again, and again, and again…

Simon Hawkins and Gary Dunn then picked up the baton and continued the good work, so that after 20 overs Oakfield were struggling at 65-4.  There was the usual comedy Barford fielding effort as Shawn Harrison and Gary Dunn collided when trying to catch a top-edge off the bowling of Simon Hawkins.  Fortunately no damage was done, as he then bowled same the batsmen a couple of balls later.

The wheels nearly came off when a “tired and emotional” Shawn Harrison was called on to bowl and delivered a succession off pies, the majority of which were dispatched by the batsmen.  After he was summarily hauled off, Simon Hawkins carried on with a the diet of rubbish only to pick up another three wickets thanks to a series of inside edges and outfield catches thereby securing the first 5 wicket haul of the season.  Meanwhile Richard Johnson was keeping things relatively tight at the other end, and chipped in with a couple of wickets.  Oakfield closed on 170-9, which reflected a good all-round bowling and fielding effort.

After a delightful tea courtesy of the treasurer and his good lady, a replete Sandy Peirson and Nathan Haynes started the run-chase, well run-canter really.  The Oakfield attack was even more miserly than our own and after half the overs both openers and Matt Cobb, who was unluckily caught off a full-blooded drive, were back in the pavilion with a mere 30 runs on the board.

Things picked up slightly as the change bowlers came on and tried to test out the middle of the wicket, but Richard Johnson dragged on one to his stumps and was quickly followed by the “unluckiest batsmen” Paul Stacey for golden duck, the ball apparently defying the laws of physics on it’s way to demolishing off stump.  Phil Morris avoided the hat-trick but then perished to the next ball in a triple-wicket maiden.

Meanwhile, at the other end I’d been carting a number of short balls through midwicket and in company with Simon Hawkins at the other end, the score had grown from embarrassing to merely disappointing.  An ugly smear at their leg-spinner saw me depart for 32 and left the Hawkins brothers to try and inch us towards respectability.

However, disproving the old adage that twins are telepathically connected, Andy ruthlessly ran out Simon before his topspin forehand picked out mid-on.  Gary Dunn joined a now (more or less) sober Shawn Harrison who rescued himself from the TFC award by clubbing a few runs and ensuring Barford’s reply ended in three figures.

MOM went to Simon Hawkins for his first ever 5 wicket haul (5-31), and the book is now closed on him doing a unique double of Batsman of the Year followed by Bowler of the Year…