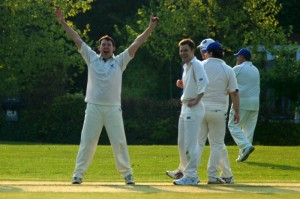 We took the pitch fielding first, Skipper Griffin having strategically won/lost (make up your own mind here) the toss. S Hawkins opened the bowling and was immediately smacked over mid off for two, only the wet outfield (and the lightning legs of Peter Romyn) preventing a boundary. “Oh dear” we thought, “is this going to be a long afternoon?” Well the rest of the over was pretty lean and we pegged them back. Jolly then opened at the other end and was similarly economical. This vein continued and some seemingly dubious LBW decisions added to a tense atmosphere. The breakthrough came with the first change in the bowling with B Griffin trapping the opener leg before for 14 and P Johnstone C&B their No2 for 13. It was 33 for two after somewhere between 14 and 27 overs*

Tony “Slow Hand” Timms then made an impact cleaning up No 3 LBW for 14. On came their No 5 and proceeded to smack it around a bit. At the other end we were keeping the run rate down though and Henricians were struggling to build a big total. Timms then struck again with the most sensational catch that Mark Griffin has probably ever taken in his career. It astonished everyone, including the batsman who hung around in his crease before eventually resigning himself to the fact that he’d been Timmsinated. The ball flew vaguely towards Griff who was somewhere between gully and point. An arm shot out, reminiscent of a chameleon catching a fly and the ball was snapped clean out of the air by the veteran fieldsman ;-). Paddy Power and Suffs have stopped taking bets on Catch of the Season: 49 for 4.

J Farquar come on for a tweak, with Keeper N Haynes stumping No6 and Farquar bowling No 7 with some lovely offspin. Hawkins then joined in the rout, bowling 8 & 9 for 6&1 respectively and Henricians were 98 for 7. A catch by Morris, covering at least 30 yards to take it, off the bowling of Griffin and a final C&B by Timms signalled the end of Henricians in the last over, for 103. This was looking positive/nervy/a foregone conclusion (insert your own adjective here).

Tea was served in fine style by M Griffin who was still buzzing about the catch he took. The ball by this time apparently travelling at close to mach 3 and still accelerating!

Skipper Griffin then had an attack of benevolence and as consolation for fielding Morris at Mid/Long on at both ends, invited him to open the batting. Fancying himself to play himself in for a while Morris immediately accepted the challenge and he and Haynes took to the field. Haynes kept out the first over without troubling the scorers. Morris then kept out 5/6 of the second over before succumbing to a ridiculous catch, having previously given the oppo an equally ridiculous sighter. He slumped off with a head resounding to quacks all round: 0 for 1.

B Griffin came out and he and Haynes set about chasing them down. Ben eventually being bowled for 15 and we were 19 for 2. Could we muck it up from here – you bet we could? On a wicket which was drying out, but still taking some movement it was foxing a lot of our shot choices. But out came Farquar, swinging his logo-less willow and in his inimitable style he picked out the boundaries with some regularity. He was bowled by their pace man Pedley for 35 and there was a definite Brett Lee moment of bowler intimidation – which all added to the spice – 83 for 3.

Out came the catcher in the gully point, M Griffin. At the other end, however, Haynes was tootling along like a drunken bird in the Newcastle Bigg Market on a Friday night **. He and Griffin pressed on and were not out for 32 and 13 respectively and Barford were 104 for 3, winning by 7 wickets.

Simon International ended the day with a further presentation of ducks to Peirson (x2), Jolly (x1) and Morris (x2) and an enjoyable afternoon’s cricket was complete. Thanks to Skipper Griffin for some excellent tactics, a sound field and some really quite good bowling. It’s just a shame that so many of Tim Jolly’s balls were “nearly” wicket takers only and so will never show up in any scorebooks. Still, Tim, there’s always tippex and delusion eh!

*the scorebook is not fully complete so a certain amount of supposition is required.

** making steady progress but you know it could all fall over, tits up, with the slightest lapse in concentration

Ed – As my dear old granny used to say, “There are always to sides to a story”, and the oppositions can be found here