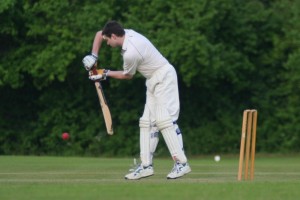 I tossed the coin for the first time this season and true to indoor form lost. So on a beautiful evening the Barford team took to the field. But would it be a beautiful start to my midweek role as captain? Well it was the Snitterfield opening pair that got off to the better start, as they were soon hitting the ball around much to the despair of Morgan, Johnson, Beaven and Johnstone. Hawkins and Griffin tried to end the partnership but the breakthrough finally came when little rabbit, angry at having been bashed for two sixes dismissed the first one with an excellent caught and bowled. The second opener was soon on his way back to the pavillion after being run out and the Snitterfield runs had stopped. Overs from Carter and Farquar ended the innings and Snitterfield had finished on 122.

With a strong batting line up I was confident we could chase down the target and after a quick pep talk in the dressing room openers O’Reilly and Farquar took to the wicket. The plan was simple as the best ones often are, take your time, have a look for a ball or two then smack them out the ground. Thats exactly what Jake did, swung at the first then smashed the second into the kids play area at the side of the pub. Thats how it continued for the next 5 or 6 overs, Jake smashing fours and sixes all over the place and somehow hogging the strike while poor old Chris at the other end, like everyone else could only watch. Our opening two were laying the perfect foundation and at 88 for 0 off 8 overs it looked like it would be all over inside 10 overs.

But things in a game of cricket can quickly change especially if you play for Barford. Jake was caught for 78 and Ben joined Chris. However Chris soon followed Jake caught for 10 and we were 92 for 2. With Ben and Paul Johnstone at the crease and only needing 31 to win surely even we couldn’t lose this one, could we? Ben went for 10 and James Beaven for a duck (which was presented to him after the game ) and we were now on 104 for 4 off 11 overs. Simon Hawkins joined Paul Johnstone and only wanting 19 off 4 overs it still looked like an easy win. However a couple of tight overs and the pressure was on us, it was now 110 off 13 overs. But Simon and Paul showed nerves of steel knocking up 12 runs with 1 ball to go in the penultimate over which went for a bye and signalled Barford’s first win of the season. It got a bit nerve racking towards the end but after such a good start we were always favorites to get there in the end.

Well played lads. As far as fantasy cricket goes, Richard Johnson was awarded the TFC by the opposing skipper and the man of the match went to Jake. However as Jake is not yet included in the fantasy league the man of the match award now goes to Ben Griffin for being second top run scorer with 10 and being joint top wicket taker with 1.