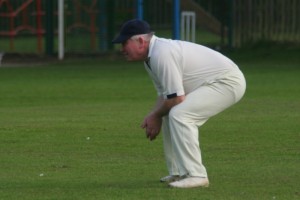 Finally summer had arrived and on a boiling hot afternoon our dear leader managed to win the toss and correctly decided we should put our feet up and watch Nathan Haynes (making his first appearance in 2012) compile a huge score with his new bat. A plan which was carried out with almost military precision except for one minor flaw. Nathan was brilliantly caught for 15 in the gully as he attempted to guide the ball to the boundary after a bright start with Neil Carter (3).

This brought Martin Lusby and Mark Griffin to the crease who began to build a healthy partnership in the sunshine at around 4 per over before Mark was bowled for 18 with the score at 72 off 18. Martin was joined by Chris O’Reilly until an over by the Unity’s Jackman (soon to become our nemesis) claimed both Lusby (34) and Sandy Peirson without scoring.

Another rebuilding phase began with Chris and Paul Henderson with plenty of overs left, but (Hugh) Jackman was withdrawn in favour of some less challenging but more random bowling. Extras also started to contribute with wides and quadruple bouncing no-balls but with the odd delivery threatening the stumps it was difficult to get the ball away (honestly). With O’Reilly obviously in the form of his life, the strike was manoeuvered and he effortlessly went towards and then blasted through his maiden Barford half-century.

With plenty of batting still left in the hutch I decided to go large against Jackman and heard the death rattle falling for 28. O’Reilly couldn’t convert his 50 into a ‘daddy’ hundred and also fell to Jackers for a tremendous 66. Paul Stacey (5 no) and Simon Hawkins (3 no) were left with the tricky task making runs at the end, but a score of 198 was a good total, if slightly contrived – and at least we hadn’t had to field in the heat of the day.

Stuffed with Mrs Johnson’s finest cakes we took to the field and almost immediately regretted that extra slice as Mr Jackman came out to open and put strike bowlers Stacey and Hawkins (and everyone else who to whom Chris threw the ball) to the sword. Simon did claim the wicket of the other opener with a high hanging catch taken magnificently by Sandy at mid-off, and another lbw finishing with 2 for 33. But the J-Unit kept his relentless assault going – bringing up his 50 with barely 60 on the team’s total. There was a fleeting chance of a stumping but he obviously hadn’t had enough cake at tea time as he tucked into bowling of Henderson and Harrison.

He also seemed determined to keep the strike from his less able colleagues, perhaps having a prior appointment to keep, and despite some noble efforts in the field and a change of ball the writing seemed to be on the wall from an early stage. Shawn and Tony Timms did get a wicket each but with the run-rate at 6, 8, 10 runs an over at times ( I lost count) even when Mr J graciously retired on 119 the result was sadly inevitable. Neil Carter’s spell was probing and economical and he was very unlucky not to snaffle a wicket or two.

The total was reached with 12 overs to spare and there was plenty of time to contemplate the man-of-the-match (Chris O’Reilly) and ‘thanks for coming’ award (Sandy Peirson) as nominated by the Aston Unity’s captain (so Chris tells me). We also enjoyed Chris’s jug of Doom Bar for his 50. Anyway, it was all played out on a lovely day in front of a capacity crowd* at the Leek Wootton Oval.