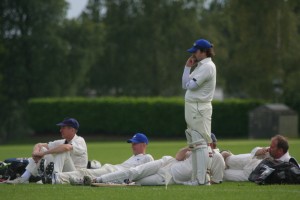 Huge thanks to both Mike’s for another hugely enjoyable, if ultimately unsuccessful, tour – although we did have the consolation of shooting ourselves in the foot with both barrels in the Saturday game. The sun shone, beer was quaffed (although not by all), and much fun was had by all (at least judging from the email storm that’s been raging this week). Here’s hoping we’ll be allowed back next year 🙂