Temple Grafton is a lovely ground, set in a valley overlooked by Grafton Court, and we enjoyed an excellent sit down tea. before lumbering out into the field. The home side were forced onto the back foot in the second over when their opener drove an Andrew Sherratt delivery hard into the waiting hands of Paul Stacey at mid-on. It seemed like a false dawn, however, as Temple Grafton’s opener (and Leamington player as we subsequently discovered) Liam Killian pounced on anything loose. He raced to 50 and looked set for a big score, until he drilled a fierce shot back to bowler Jolly who caught it in the crook of his arm. A sharp run out from fielder Beavan and keeper Sandy shifted the odds back in our favour, before Tim snaffled another caught and bowled, this time more or less elbowing the butter fingered PJ out the way. In his next over Tim bowled Grafton’s number 6 with what Sandy described as a “banana ball”, but the best was kept for last when he pulled off yet another caught and bowled, which was identical in every particular to this: https://www.youtube.com/watch?v=CvRi1SEuXSI 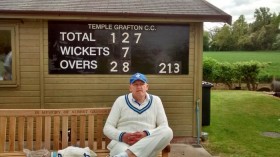