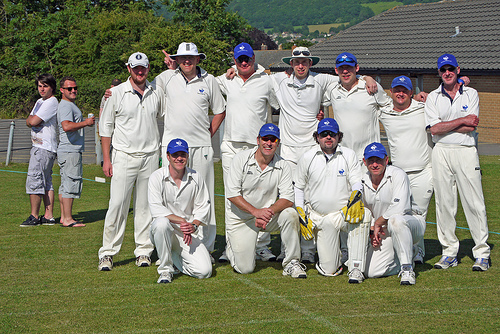 After playing two close but successful games in beautiful weather on Friday and Saturday, the pressure was on the Chairman, as guest captain, to maintain the 100% tour record. But could it be done?

Sunday morning dawned cloudy and wet in Stroud, and I wondered whether it would dash our hopes of a game. Also, club talisman and in-form superstar, club captain Ben Griffin, sadly had to withdraw from the team to tend to his wife, Liz, who was poorly. We all wish you well Liz and hope that you are feeling better now. However, when we reached Nympsfield (via a very nice lunch at the Egypt Mill at Nailsworth), we found the elevated ground bathed in sunshine, having not experienced a drop of rain. Another bonus, all round cricketer and all round good egg, stalwart Will Perry , agreed to stand in for Ben. Bearing in mind his lack of sleep over the last two days, his vast intake of alcohol and his monumental hangover – Will was a perfect shoe-in for our team, many of whom staggered medical science by being conscious.

Peirson went out and tossed up a penny for Nympsfield captain, Ben, to call. He very gentlemanly waited until it landed, looked at the upturned head and called “Tails”! I insisted that we re-toss for who batted first and shortly afterwards Paul Johnstone and walking miracle, Will Perry, staggered out to the strip, duly padded up. They got off to a very brisk start, with Will hitting several boundaries. Paul also contributed stylishly until he called for a suicidal single and was run out for 9. His excuse for this was that he “didn’t see the fielder”! Implying the Commoner was obscured by the umpire! This being the new slimline Simon Drage! Ridiculous! (Weightwatchers’ solicitors will write to you shortly Paul.)

Next in was Paul (Hendo Nagasaki) Henderson, who struggled against some very tight bowling and the overwhelming burden of being “on a pair”. He managed to avoid a return sentence of the duck costume but was soon bowled out for an edgy 7. At No. 4 was James (you look f****** old) Beaven, who tried some flamboyant shots mixed with some forward defence, but again, he struggled against some penetrating and accurate bowling and was soon plumb L.B.W. out for 6.

Meanwhile Will had been bowled for 19 and we had “gastric calamity” Jake paired with “Stomach“ Stacey at the crease. Jake scored 23 but was then caught by the wicket keeper off a skied attempt at a sweep shot. In his innings he had somehow survived two or 3 balls that had missed his off stump by no more than a quarter on an inch. Paul Stacey hit a few typically hard shots for 8, but was caught out on the cow corner boundary after hitting a low trajectory rocket off the bowling of Nympsfield’s super-slow leading wicket taker, Witney.

Next in was Friday’s man of the match, Simon Drage, who suspended his daydreaming about Bognor Butlins to face the awesome Nympsfield attack. He hit a few trademark legside fours before succumbing to being stumped to the narrowest of decisions from replacement umpire Paul (schadenfraude) Johnstone.

Yours Truly came in next, terrified of the Duck Suit. I managed to scramble a quick single before falling to a highly controversial plumb L.B.W. decision from non-other than —– P.J!

(I hear that he is being investigated by the E.C.B after his suicidal run out, questionable umping decisions, several stepovers in the field and unusual betting patterns on the Indian Sub-Continent.)
They said that his performance was at odds with his recent stratospheric batting average of over 70 (actually nearer 82.67 – ed)!

However, I’m not bitter, so back to the match.

Number 9 was Simon Hawkins, and, partnered by No. 10, Tim “dark horse” Jolly, put on a Root / Anderson-like late wicket stand of 22. Tim was bowled for 17 (including 4 fours) which brought Richard Jones in at 11. Simon H was caught at point for 3 leaving R.J. not out on 0. He successfully argued that this did not warrant the Duck Suit. ( Precedent ?).

Extras amounted to 14 and we were all out for what seemed like a low score of 118 on a fast pitch.
Nympsfield bowled 9 bowlers , who were all very competent. We failed to bat out the last one and a half of our 35 overs. (Being shortened from 40 , due to some of the Commoners wanting to watch the world cup final.)

After Tea, top Barford bowlers, Tim Jolly and Simon H. opened and bowled well. Tim being unlucky not to have their opener Parker caught off a mis-hit. Their other opener, Witney, was run out following a good throw by Will to stand in wicky, S. Drage, who promptly whisked off the bails.

Old Beaven came on next from the Bunny Club Roller end and bowled through an excellent 7 over spell , – taking 3 wickets for 25. Time now for the Bus Pass Heroes Brigade. No, not superstar Timms this time , but evergreen Richard Jones. He bowled a beguiling 7 overs, taking a well deserved 4 wickets for 27.

This brought the score to 105 for 8, and what looked like a stroll for Nympsfield had now become very tight. With Richard and James Bowled out , Paul H took up the mantle and bowled very tightly with figures of 2.2 overs for 5 runs. I returned to my “Go To” bowler, Tim (No, Silly! Drage was keeping wicket remember!) to see if he could winkle out the last two batsmen, but their No. 10 survived to score the winning runs for the home team. (Thanks Simon for wicket keeping for me, after my illness-induced pull out).

It was close. We had them worried before the home side just crept over the line to win by the narrow margin of 2 wickets in a very good match. We did drop some catches which might have made a difference, but then again we took some difficult ones which we wouldn’t have expected to hold on to. Two from Paul ( Araldite ) Stacey were spectacular. Also, my inexperience at captaincy leeched some runs with regard to my choice of fielding positions. Sorry chaps!

Afterwards we had a good drink with The Commoners at the The Village Inn at Nailsworth.

I did buy a jug here for my 3 wickets on Friday , but The Commoners drank most of it.
Sorry again chaps! This was compensated for by Richard Jones’s Jug for his 4 wickets and Jake’s Jug for his 49 on Saturday. Thank you both.

Ben, their captain, nominated Richard Jones as our man of the match for his amazing leg spin bowling. Ben was particularly surprised when R.J. bowled him round his legs, but Richard had predicted this.

(Paul J. was also among the nominations from Nympsfield for their M.O.M. but sense was eventually restored when one of their own players won it . Don’t worry, it saved you a pound Paul !)

Another great match arranged by tour Maestro Mike Ireland . Thank you Mike and all my loyal team.