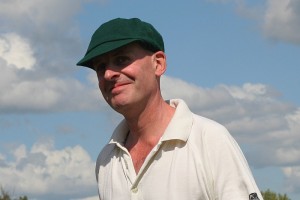 As is the usual custom, the motley crew of Peirson, Jones, Ireland and Timms made their excuses to their nearest and dearest and set off for a reconnaissance of the tour hotel and match venues. You could try and argue that this is just a natural extension of the advanced planning and preparation that helped England secure the Ashes over this winter, but I wouldn’t bother 🙂 The following report was supplied by the Tour Secretary and it is given in its unexpurgated glory (pictures from Mushie are also available here)

The Green, Green Grass of Bath

Thursday morning and the Timms-wagon sped towards Cirencester, encountering less wind resistance since he misjudged the Royal Priors car park and lost his roof rack. We arrived at The Wild Duck in Ewen, the latest entry in the Richard Jones Good Pub Guide, and we weren’t disappointed. This delightful Cotswold inn is home to Purdy Ale, an amazing tipple from an unnamed brewery that subsequent internet searches have failed to identify.

After an excellent lunch and a stop-off at The Potting Shed in Crudwell (where the chairman switched to Campari!) we made our way to Bath to check out the much-maligned Redcar Hotel. Tony skilfully negotiated the car park, which was just about big enough to house the Land Rover and two Sinclair C5s, leaving us ready to enter and explore our tour base. Despite the crucifixions on Trip Advisor the Redcar is perfectly acceptable and comparable with previous venues, however the location of narrow streets of stylish Georgian town houses, only two minutes from the town centre, make this an exceptional setting for our break.

After dumping our bags we took the ten minute drive out of town to inspect the grounds. The Sulis Club pitch looked in good nick and I suspect there may be some leather chasing on the Saturday. The clubhouse, however, resembled a derelict repossession so I sense we may be getting changed in the car park. A drive-by viewing of Combe Down, venue for Friday and Sunday, revealed that this will involve the least amount of match day travelling in BCC tour history.

Arriving back at base it seemed fitting to examine the local hostelries. After chatting to the affable hotel staff, who we suspected hadn’t got a national insurance number between them, we took a walk through Henrietta Park to check out the local taverns. “Are you the park ranger?” shouted a dishevelled character who looked like he’d been an extra in Deliverance. “It smells of s*** down there” he ranted, ignoring my assurances that I wasn’t custodian of the greenery.  Despite this advertisement for why cousins shouldn’t marry, the park is very picturesque and leads to The Pulteney Arms, an excellent real ale pub popular with the Bath rugby fraternity. The absence of Campari made Sandy improvise and persuade the young barmaid to keep supplying him with Pimms at which point we were joined by ex-Barford star Geordie Watts. The furry toper led us to his other main haunt, and my personal favourite, The Star Inn. The best way to describe this throwback to pubs of yesteryear is that the chairman chose to drink scotch!

With hunger gradually taking over we dined at a ridiculously overpriced Italian bistro before our final port of call, The Old Green Tree. By now we were starting to flag and drinking Pitchfork somewhere other than The Old Fourpenny Shop proved a little too surreal so we headed back to The Redcar (the bar consists of two lager pumps that were out of order so we turned in for the night).

Despite snoring and flatulence in fairly equal proportions we all managed to get a reasonable night’s kip and were on parade for breakfast which consisted of cereal, toast and what looked like some processed cheese and ham left over from a royal wedding party (we found several places around the corner serving the full English for those in need – Phil). Parking looks to be the only issue but Mushie was getting some information about the council car parks that we found fairly close by.

Richard was out in the alleyway topping up his nicotine levels when he was informed by one of the locals that hotel used to be owned by The Welsh Wizard, Tom Jones. I doubt Sir Tom would approve of the way The Redcar has deteriorated since his tenure but it’s more than adequate for a Barford tour.